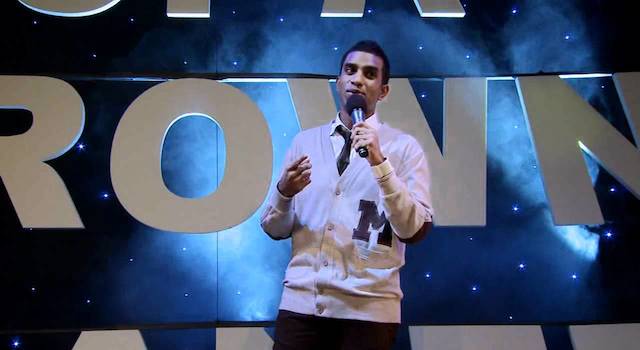 Aamer Rahman is an Aussie stand-up comic best known for his “Fear of a Brown Planet” routines in which he belittles the concept of reverse racism and ridicules “paranoid white people.”

Now that’s the stuff of GREAT comedy. Not.

Aamer’s routine is dripping with condescension and animus toward white, colonial, Europeans and Americans.

His audience laughs and praises the comic, who’s livelihood is predicated upon disdain of one sector of the population: whites.

But Aamer’s words should not be that unfamiliar — our own president echoes the same sentiments, both in his speeches and his book, Dreams from My Father. Perhaps Obama is more adept at layering a shiny veneer over the rhetoric, but his contempt lurks just beneath the surface.

Dinesh D’Souza has produced a film (Obama’s America 2016) and written extensively about the “anti-colonialist” world-view.

In this WaPo article Dinesh writes:

Pretty much the only time Obama raises his voice is when he is expressing antagonism toward the big, bad corporations and toward those earning more than $250,000 a year. I believe the most compelling explanation of Obama’s actions is that he is, just like his father, an anti-colonialist.

All of this is relevant and helpful in understanding his son’s policies.

Obama and his father both espoused an extreme anti-colonialism, exactly the same tenets woven through the “comedy” of Aamer Rahman.

If Rahman were asked to comment, he would most likely agree with the writings and assertions of Obama Sr.:

Consider the article “Problems Facing Our Socialism” that Obama Sr. published in 1965 in the East Africa Journal. Writing in the aftermath of colonialism, the senior Obama advocated socialism as necessary to ensure national autonomy for his country.

“The question,” he wrote, “is how are we going to remove the disparities in our country, such as the concentration of economic power in Asian and European hands . . .?”

Obama Sr.’s solutions are clear. “We need to eliminate power structures that have been built through excessive accumulation so that not only a few individuals shall control a vast magnitude of resources as is the case now.”

Just in case the point is unclear, Obama Sr. insisted that “theoretically there is nothing that can stop the government from taxing 100 percent of income so long as the people get benefits from the government commensurate with their income which is taxed.”

Absurd as it seems, the idea of 100 percent taxation has its peculiar logic. It is based on the anti-colonial assumption that the rich have become rich by exploiting and plundering the poor; therefore, whatever the rich have is undeserved and may be legitimately seized.

Aamer Rahman lived in Saudi Arabia until age 6, when his family moved to Australia. Rahman met his “Fear of a Brown Planet” partner, Nazeem Hussain, when both were involved with Muslim youth work.

Rahman proves the anecdotal reality that freedom of speech and religion seems to apply mostly to Muslims, especially if their skin is brown.

Moral of the story?

A brown, Muslim comedian can ridicule whites all day long without reprisals. And a brown, Muslim-loving president can govern by fiat to achieve income redistribution (one supreme goal of anti-colonialists) without criticism.

Welcome to the new world in 2014, where a brown, Muslim comedian can make a living bashing whites. So much for a color-blind society.