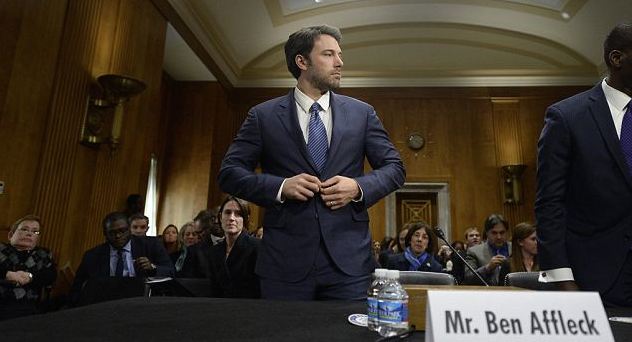 Iranian warships are near US maritime borders.  Immediately after blowing out the Olympic torch, Russian warships docked in Havana, Cuba.

The Ruski ships conveyed to Obama, the guy who dispatched a gay delegation to Sochi and refused to let Putin use the gym during the G-8 Summit in Ireland last year, this message:

You don’t tug on Superman’s cape
You don’t spit into the wind
You don’t pull the mask off that old Lone Ranger
And you don’t mess around with Put—in.

Here at home, Jonathan Turley, Barack Obama supporter and Shapiro Professor of Public Interest Law at George Washington University, warned Congress that, thanks to the president, the nation is at a “constitutional tipping point.”

Meanwhile, star of stage and screen, activist, husband to actress Jennifer Garner, and conga…sorry, Congo “expert” Ben Affleck testified before Congress on the trials and tribulations befalling the Democratic Republic of Congo.

What the useless US Congress is supposed to do about the Congo is a mystery, given the fact that the Democratic Republic of America is unraveling and the guys and gals Affleck “dazzled” on Crapitol Hill…sorry, Capitol Hill, haven’t done a damned thing about the unfolding catastrophe here at home.

While Barack Obama was flouting the law, busy expanding the spying scope of the NSA and warning Americans that the IRS has ways to ensure Obamacare taxes are paid, star-struck Republicans and Democrats apparently had better things to do than address Obama’s tyrannical overreach.  They were busy drooling all over Ben Affleck like schoolgirls in the front row at a One Direction concert.

Politicians like John ‘Bi-partisan’ McCain, who wouldn’t recognize commitment if he spent five years locked up in a POW camp with it, were taking selfies, gushing with patronizing compliments, requesting autographs, and telling the star of Armageddon that his “credibility is really remarkable because of the depth of [his] commitment.”

Affleck asked the Obama administration, in conjunction with Congress, to play a greater role in furthering the success of the Democratic Republic of Congo’s future.

Sorry to say, it doesn’t matter what Ben was talking about. Instead of focusing on Africa, Ben should take a look around. Right about now some Congo-level cause célèbre from the likes of Ben Affleck is the last thing we need to deal with.

Rather, Congress needs to focus like a laser on the mess the President is inflicting on America.

Despite the flashbulbs and effervescing lawmakers, in an attempt to feign humility, Affleck the Actor said:

“I am, to state the obvious, not a Congo expert.  I am an American working to do my part for a country and a people I believe in and care deeply about.”

In the end, Ben is “optimistic about the future of the Congo!”  Meanwhile, the future of America hangs treacherously in the balance.

In a few years, after Barack the Bully and the inept Congress get done obliterating the United States, if Ben Affleck is done doing the Congo, he can turn his well-informed attention toward doing his “part for a country and a people” right here in America.