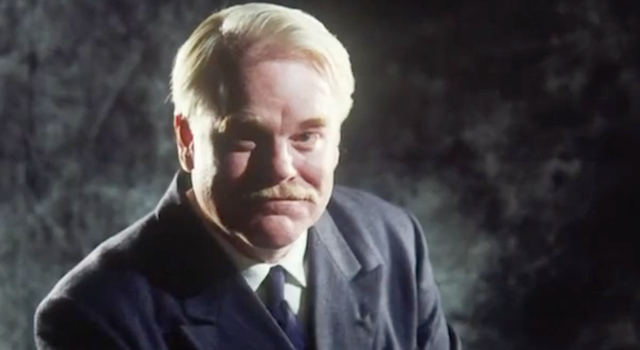 With the death of Phillip Seymour Hoffman, America has lost another genius; or so we are told.

Phillip Seymour Hoffman was a drug addict who could act. His acting was wonderful. I’m not being heartless about the death of a 46 year old man, who obviously didn’t take very good care of himself. It’s no surprise to me that Hoffman is dead, though we never know for whom the bell tolls.

But let’s keep it real. Aside from Hoffman’s obvious avoidance of the gym, this genius of the Left was found dead with 75 bags of heroin along with assorted other drugs. The unintended consequences of genius?

The Left love their conveniences. Hoffman had them all. Who doesn’t wish to make a living doing what we love? Yet, even doing what he loved, Hoffman was unable to deal with reality, and overdosed.

I’d like to know from what reality a Liberal, doing exactly what he wanted to do in life and making crazy money doing it, would want to escape.

“LEARN from Hoffman,” we are told.

Exactly what is the lesson of Phillip Seymour Hoffman, the tortured genius? That heroin addicts can act?

Hollywood and politics seem to be among the very few places where drug use or abuse are props in their stage plays and warped sensibilities. In fact, I contend that these Leftist geniuses see drugs as steroids.

While the rest of us are fighting against Leftism unmedicated — and they might contend, crippled — the Left is toking up, shooting up, sniffing up all this so-called genius they can find in drugs.

Jimmy Hendrix, Amy Winehouse, Kurt Cobain, and many others supposedly used heroin, and people credit their creativity and abilities to the drug. Far too many “geniuses” in the entertainment industry indulge in drug use of one sort or another.

The Left can’t hack it without some medication for the most part. Without medication, they are forced to deal with their ugly realities, so they medicate to chase away their demons.

I  admire Hoffman’s talent, though it was likely drug-induced. But don’t try to convince me that he is something he is not.

“But Kevin, Hoffman was nominated for an Emmy!”

BS awards given by his self-indulgent, drugged out peers? I’m sure that nomination went a long way, as Hoffman was tying off his arm to find a vein for that last hit.

Who dies in their bathroom with a needle sticking in his arm, while his 3 children play in the park?

The headlines are less about Hoffman, the genius, as they have evolved into derivatives around some bad form of heroin that perhaps Hoffman used. Heroin kills. Sometimes slowly, and sometimes more quickly. But you’re pretty much dead once you begin using the drug.

Despite what the Left wants America to believe, drugs kill. If they don’t kill you fast, they kill you slowly. Alcohol, cigarettes and marijuana, cocaine…all slow deaths, that detach you from reality, so you can be brilliant…a genius if only for a little while.

You want to know what I find brilliant?

I find young men willing to go through the most brutal of combat training to protect this nation. THAT, my friends is brilliant!

I find the millions of conservative women who choose to home school their children brilliant. I find the MILLIONS of entrepreneurs who chase that God-inspired thought, and decide against all stumbling blocks that the government throws in their way, to start a business…brilliant.

Brilliant is the father who faces his life without drugs, and who takes the man’s responsibility of providing for his family, protecting them.