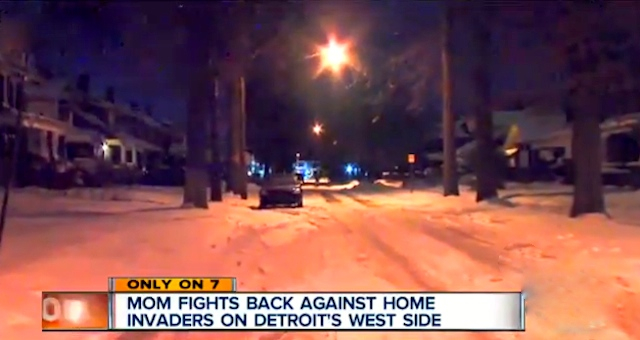 “Oh no mommy, I don’t want them to take my piggy bank or my toys,” said a frightened child to her mother, as three hooded, juvenile urban terrorists kicked in the front door of their Detroit home.

With no seconds to spare, and the police minutes away, the mother of two wisely relied on the Second Amendment to uphold the first rule of nature… self-preservation.

Speaking to WXYZ Detroit, the protective mom described her response:

“I let them know I had a gun once they were in the house and they challenged me and said, ‘No you don’t have a gun.’ So that’s when I shot off the first round. I wasn’t feeling anything at the moment, I got scared afterwards.”

Her warning shot sent the urban terrorists scurrying from the house.

During their hasty retreat, one of them inadvertently dropped a handgun into the thick snow that covered the yard. As he paused to retrieve it, the other two kept running.  After recovering the gun, he decided not to resume flight. Instead, he daringly resumed their original plan of storming the house.

He was quickly greeted by gunfire when he attempted to reenter the home.

Once again, he was on the run.

All three juvenile urban terrorists were arrested a short time later, which is a rare accomplishment for the Detroit Police Department. Unsurprisingly, the cops were already familiar with the three menaces.

Hopefully, the family’s surveillance camera that captured the ordeal will be enough to keep these animals caged for an extensive period.

Oops, I think that I just offended the animal kingdom.

(Learn more about urban terrorists within the Black community here)