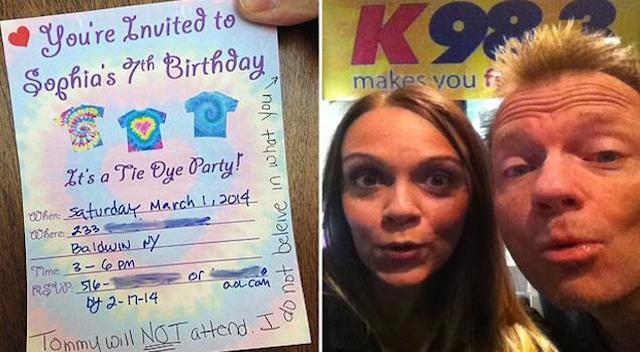 This is a public service announcement. A hoax was perpetrated.

The title story, “broken” by Long Island radio station K-98.3 on Wednesday this week, claimed that a mother whose child was invited to the birthday party of a school friend, being given by her “two dads,” responded with disapproving comments in her written RSVP.  The tale quickly went viral, exciting some very natural attention right here at LU.

The story’s gist included debate-bait comments supposedly made by the mother:

“Tommy will NOT be attending,” wrote Beth on the invitation. “I do not believe in what you do and will not subject my innocent son to your ‘lifestyle’. I’m sorry Sophia has to grow up this way. If you have an issue or need to speak to me: [phone number].”

The narrative then purported to recount the anger felt by the “two dads,” followed by an escalating feud in which the mother authorized her phone number to be released by the radio station, and dared people to contact her.

Now it turns out that none of this ever happened.

Steve [Harper] and Leana, co-hosts of the radio station’s “Morning Show,” made the whole thing up…