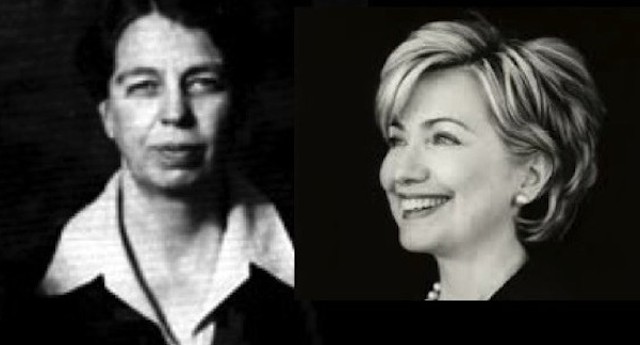 Siena College Research Institute did a ‘greatest first lady of the United States’ survey and Eleanor Roosevelt came out on top.

That survey just might be the result of a proclivity that was surmised to be true based on her alleged ‘close relationship’ with journalist Lorena Alice Hickok.

Nevertheless, after ‘woman on top’ Eleanor Roosevelt comes Abigail Adams, probably for her ‘Dear Abby’ advice letters to John. Next is Jacqueline Kennedy because of that missing pillbox hat, and following her is Dolly Madison, which is easy – for her ice cream and baked goods.

Next in line comes Michelle ‘Let’s Move!” Obama – the woman “the world has been waiting for.”

Hillary should really be moved up to the top slot with Eleanor because of the kindred-spirit connection she and the wife of the 32nd president share.

In the book The Choice: How Bill Clinton Won, Bob Woodward wrote that Hillary Clinton told him that she talks to the dead president’s wife.

Mrs. Clinton’s imaginary conversations with Eleanor Roosevelt start when Hillary calls on Mrs. Roosevelt. Hillary claims “She usually responds by telling [her] to buck up, or at least to grow skin as thick as a rhinoceros.”

Recently those séance sessions between Hill and Ellie were confirmed when Bill Clinton, who, while speaking at a dedication ceremony for the Franklin D. Roosevelt Four Freedoms Park in New York City, said that through his wife Hillary, Eleanor passed him a message to deliver.

Clinton gave a shout-out to the late Eleanor Roosevelt, who’s been dead since 1962, for making sure that the four freedoms were included in the preamble to the Universal Declaration of Human Rights in 1948.  Clinton claimed he knew about Eleanor’s role in the preamble because the previous evening he received a message from his wife, who he said “communes with Eleanor on a regular basis.”

Bill told the enthralled Roosevelt family that while Hillary was en route from Peru back to the US, she told him “That Eleanor had talked to her and reminded her that I should say that.”  Surely, the members of the Roosevelt family must have been wondering why Grandma Eleanor doesn’t contact them.

More recently Hillary, who’s busy trying to sew up the female vote for the 2016 election, was speaking at New York University at an event kicking off a partnership with her family foundation’s “No Ceilings” project and the Bill & Melinda Gates Foundation. It was there that Hillary recalled her private chats with the late Mrs. Roosevelt.

Verifying what Bob Woodward had previously written and the message Bill conveyed at the Franklin D. Roosevelt Four Freedoms Park, while speaking to women seeking careers in public service, Hillary recalled Eleanor Roosevelt’s advice to her:

“One of the best pieces of advice that I have ever heard from anyone is from Eleanor Roosevelt in the 1920s, who said that women in politics or in public roles should grow skin like a rhinoceros. I think there is some truth to that.”

Sounds like, in addition to a talent for necromancy and being ‘the smartest woman in the world,’ Hillary Clinton has the ability to time-travel.

For the greatest first lady survey, “pollsters asked 242 historians and political scientists to rate 38 presidents’ wives in 10 categories such as ‘courage,’ ‘integrity,’ ‘value to the country,’ and ‘accomplishments.’”

If Hillary Clinton can really convey messages from the 1920s, she should come in second right after her alter ego, leaving Michelle Obama in the dust.

Michelle scored high in the category of “being her own woman” and “value to the president.” But despite her dedication to her organic garden and faithfully turning the fountain on the South Lawn green every year for St. Patrick’s Day, Michelle’s weakest area was seen to be in her capacity of “being the White House steward.”

In the end, what’s notable about the survey is that Michelle is higher on the list than presidential hopeful Hillary.  But when you think about it, that’s sort of like having serial killer Aileen Wuornos and axe murderer Lizzie Borden in a popularity contest, and getting all excited because Aileen came out on top.

The sad truth is, neither Michelle or Hillary belong on any list that comprised of women of integrity or character. The Siena College Research Institute may need a mulligan on this “best of” list.