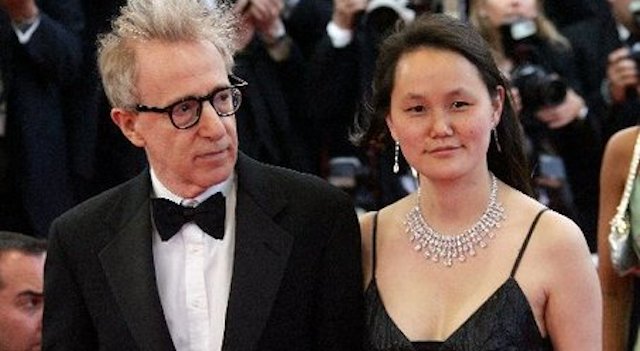 Hollywood is a sick place, and the icons that Tinsel Town lionize are sicker still.

Which may be why fiends like child rapist, Roman Polanski, is still held in  high regard by a community of similar style predators.

Recently, the adopted daughter of Mia Farrow and director Woody Allen (the Hollywood hero who gave angst and anxiety disorders a face) couldn’t tolerate her father being feted as some sort of hero yet again.  So, instead of remaining silent, Dylan  spoke out about the sexual abuse she endured from Woody when she was 7-years-old.

In a powerful letter to the New York Times, Dylan Farrow, a lovely red headed woman with porcelain skin, rebuked a superficial industry that chose, and still choses, to ignore dangerous character flaws that she says even involve crimes against children.

Instead of fighting on behalf of a little girl, and withholding awards until the truth is found out, Hollywood recently awarded Allen with a Golden Globe, Cecil B. DeMille award.

And even though Allen is a man whose daughter insists he forced her to lie on her belly in an attic and play with electric trains to keep her mind off the fact that he was sexually abusing her, the Academy Awards still nominated his film Blue Jasmine for best original screenplay, and for best actress Cate Blanchett, which is why  Dylan called her out by name in her letter.

It’s no secret that, in conjunction with the liberal politicians, Hollywood is directly responsible for the deterioration of this nation. They glorify sex and violence, support empty suit presidents with campaign money and huge fundraising events.

And given the opportunity, Hollywood is eager to speak out on behalf of abortion, gay marriage, and promote the type of socialized healthcare that will never impact any of their pathetic lives.

While all that says a lot about a powerful industry being void of character, nothing compares with Hollywood choosing  to give another award to a man suspected of child abuse.

Let’s face it, Woody’s presumption of innocence was certainly called into question when, at age 56 he took nude photos of Mia Farrow’s adopted daughter, Soon-Yi Previn, who he then ran away with and eventually married.

“He’s my father married to my sister. That makes me his son and his brother-in-law. That is such a moral transgression.”

Hollywood offers up unwavering support for those who exact damage on everything from a sexually abused daughter to a nation being politically abused by a narcissistic incompetent president.

And thus, predatory Hollywood is as guilty as those they celebrate.