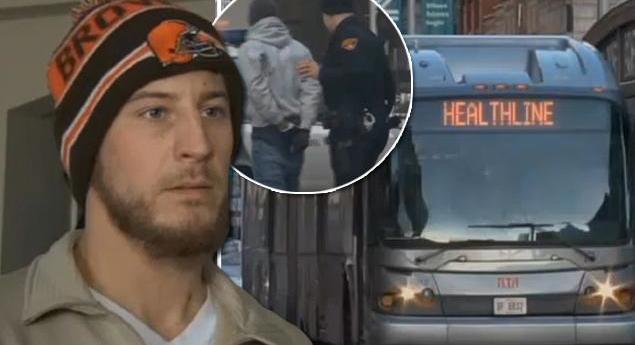 One day while riding Cleveland, Ohio’s “Healthline” bus, Matthew Robinson, a disabled Army veteran, realized that his health was actually on the line after being surrounded by approximately eight Juvi-Thugs.

When he exited the bus, which was near Cleveland’s Public Square, they followed and eventually attacked him. During the unprovoked assault, he was taunted with racial slurs, and robbed of his items.

Adding insult to injury (but beneficial for law enforcement), one of the miscreants filmed the attack on a cellphone for their sadistic enjoyment.

“The whole time I’m just thinking, pretty much protect myself and don’t let anybody in behind you.”

The Juvi-Thugs scattered once police arrived, but luckily, three of them were apprehended, including a 16-year-old girl who recorded the incident.

(Read here to learn the non-PC truth about of these “teens.”)

Knowing the detrimental effects of crime, Cleveland has increased the police presence at Public Square. Of course, this short-term solution doesn’t address the real problem (culture), but like most cash-strapped cities, Cleveland simply cannot afford to have taxpayers assaulted, and the commerce districts hijacked by Juvi-Thugs.

I wonder how Cleveland’s NAACP chapter feels about this story. Just kidding, I already know… it’s the victim’s fault.