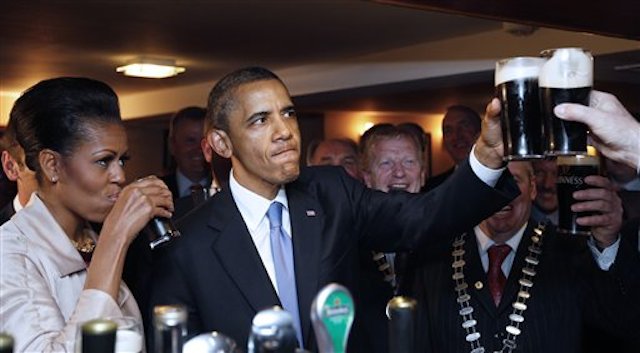 As for hubby, who comes from a long line of Uncle Omar-style alcoholics, well, he’s has been known to pound down…I mean sip… a martini or two with friends, raise a glass of champagne now and then, and chug-a-lug a frosty cold one.

Even Max Baucus, the democrat senator from Montana, allegedly does not let inebriation prevent him from sharing deep thoughts on the House floor.

On the Republican side, John Boehner had almost succeeded in convincing America that drinking wine while mowing the lawn was a bipartisin pastime. But a new study, published by the Journal of Wine Economics, reveals that “alcohol consumption in American states rises as the population’s politics becomes more liberal.”

Pavel Yakovlev and Walter P. Guessford, of Duquesne University in Pennsylvania, ran a study whose findings show a direct correlation between liberal beliefs and alcohol use. The data show that people in states with liberal representatives tend to consume up to three times more alcohol per person than politically conservative states.

In other words, by getting all liquored up, lefties evade the sorrows they create.

The study concluded that “[e]ven after controlling for economic, demographic, and geographic differences across states…liberal ideology has a statistically significant positive association with the consumption of alcohol in the United States.” Yakovlev and Guessford offer two possible theories to explain why there’s such variance in liberal and conservative alcohol consumption.

As verified by Choom gang member/cocaine user Barry Soetoro, who, unlike white powder-nosed, cigar-smoking Bill Clinton, actually did admit to inhaling, one theory is that liberals tend to be more “open to new experiences, such as the consumption of alcohol or drugs.”

The other theory Yakovlev and Guessford put forth to explain liberals’ liberal libation habits is their reliance on government health care and social welfare to come to the rescue.

And while all those notions are plausible, if I may be so bold, there are a few additional theories the authors of the survey failed to include.

Is it possible that alcohol consumption and debauchery rise in relation to godlessness and lack of patriotism. Remember, there is a marked increase in alcohol abuse in communist or statist regimes, which are notorious for heavy drinking.

Liberals support socialism. Then, as freedom wanes, they manufacture artificial freedom by living in an intoxicated state.

Here in America alcoholism is a problem in neighborhoods where liberal policies cultivate despair. Folks stuck in the urban ghettos would rather drink Thunderbird concealed in a brown paper bag than face the harsh reality resulting from policies they voted for.

How about those ‘drunk with power’ like the Obamas, the Clintons, the late Ted Kennedy, and whoever else is running up liquor bills for taxpayers to cover?

For those Lefties (aka Socialists) cocktail parties come in handy to drown the guilt over things like late term abortion, lying incessantly to the American people, and systematically dismantling the Constitution.

Makes perfect sense: rather than face the dreadful consequences of their failed policies, Liberals prefer to “become comfortably numb.”