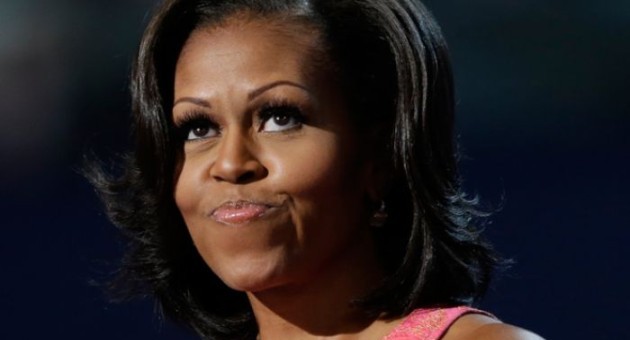 Hopping aboard a taxpayer-funded airplane, Mrs. Obama recently scooted out to California to work the fundraising circuit.

Michelle dropped in at the luxurious Fairmont Hotel in San Francisco for a DNCC women’s luncheon where she urged big-money donors to “dig deep” and “max out.”

The main purpose of Michelle’s trip was to raise money to finance the 2014 mid-term elections so that those who share Obama’s twisted anti-American values can help the president drive the final nail in America’s coffin.

According to the first lady, Obama wants to lift up the middle class and restore opportunity to those who, since he was elected, have lost all hope for the future.

Michelle seems convinced that Americans “working 40 or 50 hours a week” who are now “stuck in poverty” can count on those who caused the mess to fix it.

During her stem-winder Michelle brought up the usual “there but for the grace of God go I” baloney that neither she nor Barack actually believe.

She also stressed that “Our young daughters are counting on us to fight for their rights and freedoms,” which is code for abortion rights.