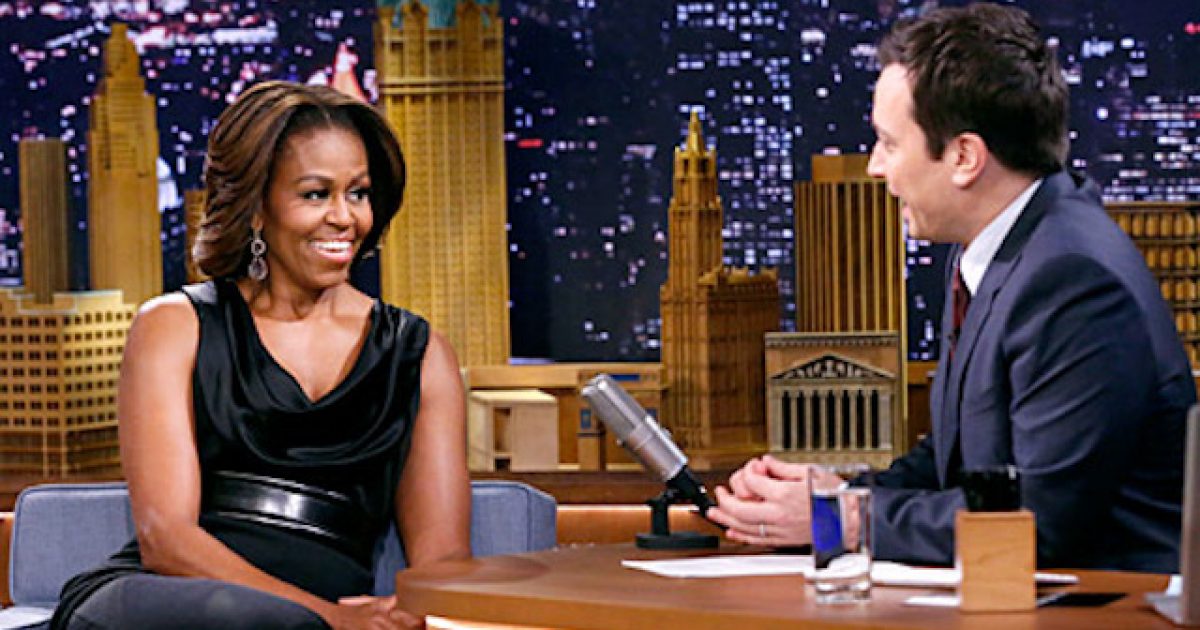 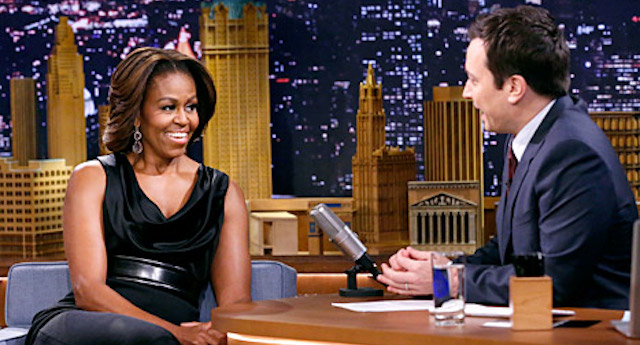 Young people of America! The first lady of the United States thinks you’re a “knucklehead.”

That’s right, a “knucklehead,” which is defined as “A stupid person; a blockhead…fool; idiot… a stupid, bumbling, inept person.”

Merriam-Webster dictionary online lists words that are synonymous with knucklehead, like airhead, birdbrain, cretin, doofus, dumbbell, half-wit, ignoramus, nincompoop, and schnook – you get the picture.

First FLOTUS attended a faux pajama party and danced it up with two ex-SNL comedians in drag. Then Michelle informed her slumber party mates, “Sara” and “Stacey,” that kale chips are high in what sounded like “Omega-3 fatty-ass-id.”

After the skit, Mrs. Obama slid into something more comfortable, and sidled up on Jimmy Fallon’s couch to continue politicizing late night TV on The Tonight Show.

“Well, thanks to the Affordable Care Act, young people can stay on their parents’ insurance until they are 26. But once they hit 26 — they’re on their own.”

There was a time in the not-so-distant past when staying on your parent’s insurance until you’re 26 wasn’t something to be proud of. Michelle Obama warned that at age 26, young Americans who are unemployed thanks to her husband are really, really on their own.

Thankfully, as a fill-in for Papa and Mama, Obamacare will happily stand in the gap.

“And a lot of young people think they’re invincible,” and here’s why: because “the truth is, young people are knuckleheads.”

Why are they knuckleheads?  According to Mrs. Obama, “They’re the ones who are cooking for the first time and slice their finger open, they’re dancing on the bar stool.”

Wait! Cut their finger cooking?  Dancing on bar stools? Is that how the first lady views America’s young people?   Moreover, isn’t this the woman who wants to hand out abortifacients to teenagers like candy? So why is she worried about cut fingers and bar stool injuries?

Apparently Michelle Obama views twenty-somethings as klutzes who can’t handle a paring knife. People so sheltered that, at 26 years of age, they finally cook their first meal like a big boy and a big girl.

Then, after slicing open a finger and only barely able to stop the bleeding because of not having Obamacare, these knuckleheads go and drown their no-health-insurance sorrows in a bar, getting sloshed and dancing on bar stools.

How condescending.  How insulting. How totally obnoxious.

If Millennials are “knuckleheads,” it’s for being stupid enough to help elect Barack Obama – who ironically happens to bear a striking resemblance to Knucklehead Smiff – not once, but twice.

Clearly, Mrs. Obama doesn’t realize that if not for those “knuckleheads,” her husband might not have been elected all those long, miserable years ago.

With that in mind, this is a perfect opportunity for the ‘Young Invincibles’ to send a truly invincible message. Refuse to be coerced into Obamacare by this supercilious woman.

The condescending First Lady and her  dummkopf husband have already placed too many burdens on the shoulders of those she’s calling “knuckleheads.”

So when Obamacare comes calling? Just say no!