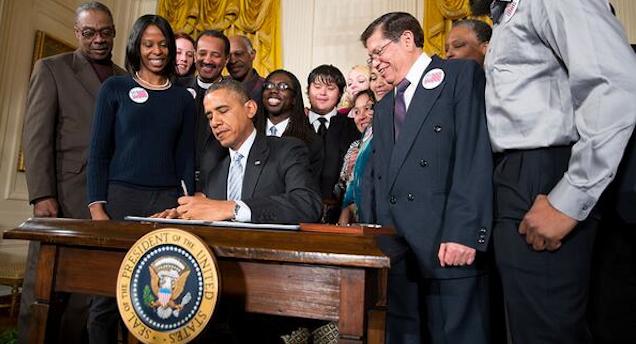 Obama tweeted: “In the wealthiest nation on Earth, no one who works full-time should have to live in poverty.”#RaiseTheWage

President Obama: "In the wealthiest nation on Earth, no one who works full-time should have to live in poverty." #RaiseTheWage

It is ridiculous for Obama to believe that nobody working should live in poverty. What does he think the people who built this nation did?

Back in the day, nobody was guaranteed riches. Farmers grew crops hoping for enough yield enough to get by and do it all over again the next year. If they were good at it, then they might earn enough scratch to get the kids some new clothes.

What if you know nothing about your job? Should you get a livable wage if you are a novice, or worse yet, a total screw-up?

I’m actually describing Obama himself — a man who receives (note: does not earn)  $400K a year, and is a screw-up of NUCLEAR proportion!

Obama is either naïve, or he wants class warfare. I suggest the latter.

He wants people to believe that America owes everyone an adequate living. If you have a miserable life, it’s not your fault. It’s the fault of the TAXPAYERS. They simply aren’t giving you enough.

I’d like to see how socialist countries are dealing with working people living in poverty. Does Obama even look around when he goes on his taxpayer-funded vacations disguised as official U.S. business?

I’d like Obama to name one rich nation where all the full-time workers are living in luxury.

Here’s a novel idea: live within your means!

This fool wants us to believe that our “poor” people (who have gaming systems, cable TV, cell phones, designer handbags, grills, and the like) are living like starving Ethiopians, distended bellies, flies and all. I’m sick of Obama and the Leftist lemmings implying, no, outright stating, that the crappy choices of others are somehow our fault.

Does America not have enough SAFETY NETS for the poor?!

What Obama SHOULD tweet is: If you don’t have a full-time job, it’s MY FAULT! #ObamaFAIL

The problem with Obama’s “jobs,” is those jobs are menial. Instead of worrying about minimum wage, Obama should learn how to create maximum jobs.

Instead Obama, aka Ms. America, wants the government to eradicate poverty. The man who spends a trillion dollars more per year than any president in our nation’s history, and who has presided during a time when the nation has the worst credit rating in history, knows how to deal with poverty.

He certainly does. Obama is the king of putting people IN poverty.

“22,000 people a day getting on the food stamp program. I’m Barack Obama, and I approve these results!”

Thankfully we may soon have 2.5 million fewer underpaid workers “living in poverty,” because of ObamaCare.

All those specialists in French Renaissance poetry can leave Walmart, disregard the application for work at the medical marijuana clinic (for the medicinal benefits), and just kick back and relax. Obama’s got your back!