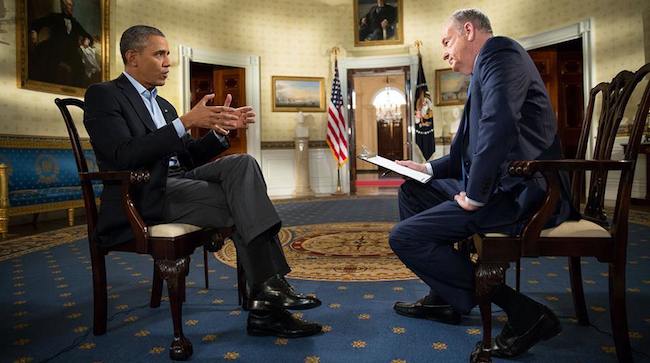 But let’s face it, Peyton Manning was getting mucho attention so, not to be upstaged, the president agreed to a pre-game sit-down.

For the rest of America, watching Obama run in between O’Reilly’s legs while the Fox News cable show star attempted in vain to tackle the slithering POTUS was as painful to see as the Seattle Seahawks routing the Denver Broncos.

Casually dressed, Obama showed up for the interview with his perpetual smirk and shoes so shiny you could almost see a reflection of O’Reilly’s nostril hair.

Facing the president in a chair for short people, O’Reilly’s gangly legs had nowhere to go. Then, after bloviating for weeks beforehand, O’Reilly’s “alpha male” bluster seemed more like a tall guy in a pink tutu trying to appear aggressive, but failing miserably.

As for Obama, except for his clenched jaw he seemed relaxed and confident, and even smiled with pride twice. Once when O’Reilly blamed the Bush recession for six years of economic woes, and then again…