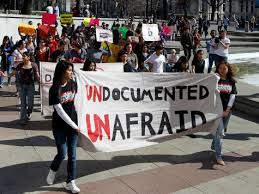 I predicted that Obama would get desperate with ObamaCare and this is close to the bottom of the barrel.

“No temas si eres indocumentado/a y quieres inscribir a tu familia en un seguro médico” (“Fear not if you are undocumented and want to enroll your family in health insurance”).

That is what the Covered California website explains to illegals. They also make sure to let illegals know that none of the information given for healthcare will be shared with Immigration and Customs Enforcement (ICE).

Another lamebrain idea from America’s brain-dead president, whom the Left deem a GENIUS!

According to Bloomberg, ObamaCare isn’t attracting the Latinos, so this latest move by Obama appears to be another desperation move. I predict a “Hail Mary” soon, when ObamaCare offers a voucher for Taco Bell or some other such nonsense.

What an insult to Mexican nationals. Does Obama think they are stupid enough to sign up for what they get that is already free?

So they can get a bill they either can’t or won’t pay.

ObamaCare needs big numbers, and they could not care less where they get them. If it means burning the Constitution and the American taxpayers, for Obama that’s a small price to pay for his “legacy.”