Hopefully, after he went missing for a spell, someone checked under Mrs. Obama’s over-sized black and liberty blue silk $12,000 Carolina Herrera ball gown, because President François Hollande of France was there and then POOF he was gone.

You hoooo François! Come out come out wherever you are!

Let’s be painfully honest people, because based on the difference in  heights, François could have easily gotten swept up by Michelle’s skirt and missed the multi-million dollar Monet-inspired ‘share the wealth’ festivities.

Maybe next time Michelle could be a little more sensitive and dress in such a way that short-sized socialist leaders can avoid being swallowed up by flouncy ‘piece of the pie’ skirts. 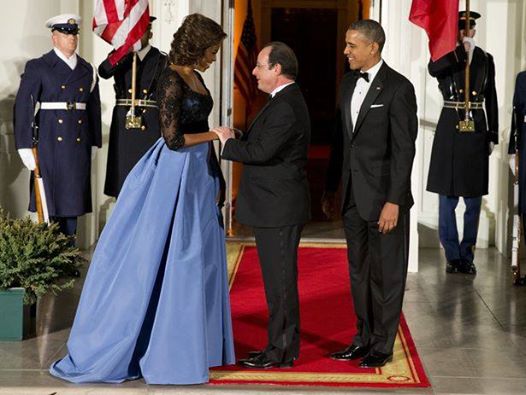