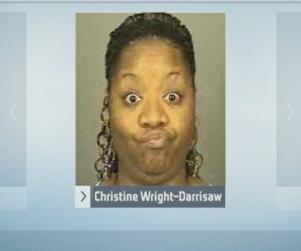 But the woman (an obvious racist) who actually wants to kill Barack Obama is black. Christine Wright-Darrisaw was upset about child custody laws. Perhaps she was saddled with the kids in a not-so-bitter custody battle, and now has to handle her burdens all by herself?

Wright-Darrisaw called the White House and spoke to an operator, to whom she uttered the threat against Obama, after asking why he hasn’t done more in the area of child custody.

According to WHAM-TV, when questioned by the Secret Service agent investigating the case also testified, Wright-Darrisaw gave different and stories, one in which she claimed somebody else must have made the threat when she put her phone down.

Perhaps her defense will use the “ObamaPhone” defense?