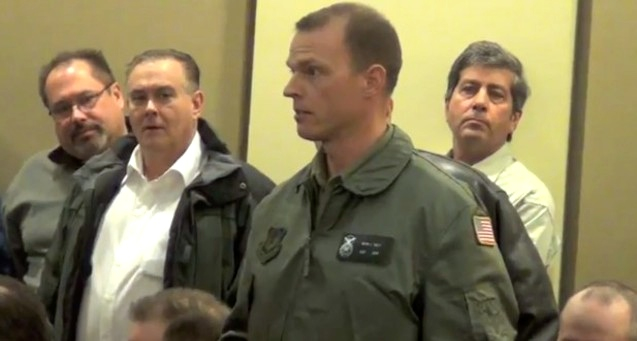 Americans everywhere, Patriots who believe in the Constitution, are beginning to show signs of fighting for our inalienable Second Amendment rights.

Here is a brilliant and inspiring example of We the People pushing back at the gun-grabbers. And though it took place in January 2013, the impact of the event is still being felt.

After enduring hours of derision and mockery by the panelists at a Chicago-area guns “forum” Sunday, one man in the audience stood up and addressed the crowd, identified himself as a veteran, and proceeded to give a straightforward but passionate defense of his support for the First and Second Amendments.

The video is awesome!

Here is the exchange:

Veteran Tully: Sir, sir. While you’re standing up. I’ve sat here [inaudible] and I’d like to agree with the professor. Everyone standing in this room right now, especially the veterans in the room right now, know, that we are all Americans. The problem with this country right now is it’s us and it’s f***ing them. We need to stop this crap.

Now, the thing I would like you to answer, sir. And I did go to war for this country. Whether it was for everyone in here’s ability to have oil and gas in their cars, or the banks, or whatever. I went to war for my country.

And I went to war for your ability to have the First Amendment, to say what you stood up there and said today, to write what you want to write in your newspaper, and have whatever opinion you want to have. You can practice whatever religious freedoms you want. I would like you to answer the question, since you just said that one of the rights that I went to war over to defend, that is inalienable, to every American citizen. If this discussion was going on, about your First Amendment rights, would you still have the same opinion that we don’t need that any more either.

Goodman: You didn’t hear my answer….that’s not what I said…I said it doesn’t matter what their reasons are, what matters is whether or not it’s relevant today.

Goodman: When they consider any part of the Constitution, any law, they’re going to say, “what does it mean today?”

Well said Kevin Tully! The founders had thrown off the tyranny of King George and knew in their heart of hearts that, to secure their on-going liberty and independence, Americans must have the right to keep and bear arms.

And to emphasize the origin of our rights, they included the word “inalienable” in the Declaration of Independence.

“We hold these truths to be self-evident, that all men are created equal, that they are endowed by their Creator with certain unalienable Rights, that among these are Life, Liberty and the pursuit of Happiness. That to secure these rights, Governments are instituted among Men, deriving their just powers from the consent of the governed.”

And for those on the Left who have conveniently forgotten the meaning of the word:

Inalienable: incapable of being alienated, surrendered, or transferred; impossible to take away or give up

The founders considered these rights to be given by God Almighty, and as such, could never be taken away by mere men.

Lee Goodman of the Stop Concealed Carry Coalition in Illinois was given a stern reminder that We the People are endowed by our Creator: those rights were NOT bequeathed by some elitist, central planning group.

Thank-you for your service Veteran Tully, and thank-you for reminding one Lefty that he is not, nor will he ever be God.

A well regulated militia, being necessary to the security of a free state, the right of the people to keep and bear arms, shall not be infringed.