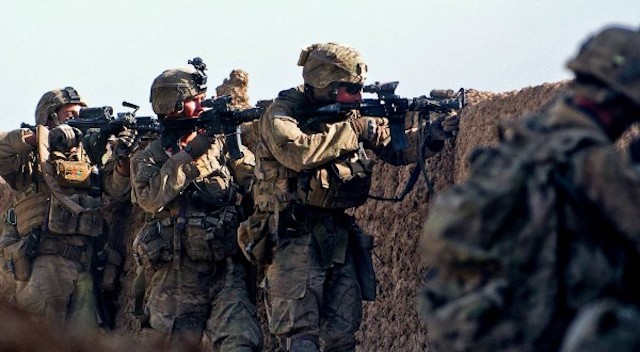 ICYMI, the Army’s job is to kill people. That is violence.

“The mission of the infantry is to close with the enemy by means of fire and maneuver to defeat or capture him, or to repel his assault by fire, close combat, and counterattack.”

The Army is a defensive/offensive force that prosecutes missions on order from the CIC. Arguments on national interests aside, those missions, more times than not, are of a violent, mortal nature.

The men who feel called to take up the profession understand this, and are willing to not only put themselves in harm’s way, but to also exact violence upon any who threaten them or their brothers. This requires a certain level of courage and a tacit acknowledgement of the nature of their duties.

There was a big push from the outset of the current wars to acknowledge the fact there are no more front lines; that all members of the Army have the potential to see combat first hand.

The DoD even came up with an award for it. A knock off of the Combat Infantrymen’s Badge (an award coveted by all Infantrymen), the Combat Action Badge was designed to reflect the modern nature of warfare. Regardless of how I feel about this award, it exists, and is worn with pride by the men and women who have earned it.

In fact, in Iraq in 2005, a female MP was awarded the Silver Star for her actions in combat. MP is as close as women in the Army can come to being Infantry, and their jobs often times put them in the thick of things. I read the citation that went with the medal and by that account, she deserved it.

It’s a dangerous job not to be undertaken by those faint of heart.

The reason I write this is I’m getting more and more disturbing reports from buddies (men that I served with) that the Army is currently reprimanding soldiers, not to mention outright chaptering them out of the Army, for being too aggressive.

Because a passive Infantry/Army wins wars.

I saw this start to take root during our first deployment to Iraq. ( Another story for another day. )

The short of it was my team leaders and soldiers did their jobs and they did them well. There were no investigations. There were no questions as to the righteousness of the shootings, yet there were members of the MP company stationed on our base that called these men baby killers.

Understand, the shootings all involved men well into their 20s. No women. No children. Yet the men and women we were working to protect were calling my men baby killers. To their face.

So, in true Infantrymen fashion one of my Team Leaders responded: “Yes ma’am. Every night in my rack”.

This is not a peaceful world we live in. There are evil, evil people who plot to harm others. They do this with alarming clarity and precision.

The world is not becoming a kinder and gentler place, and whether you like it or not, George Orwell was right.

“People sleep peaceably in their beds at night only because rough men stand ready to do violence on their behalf.”