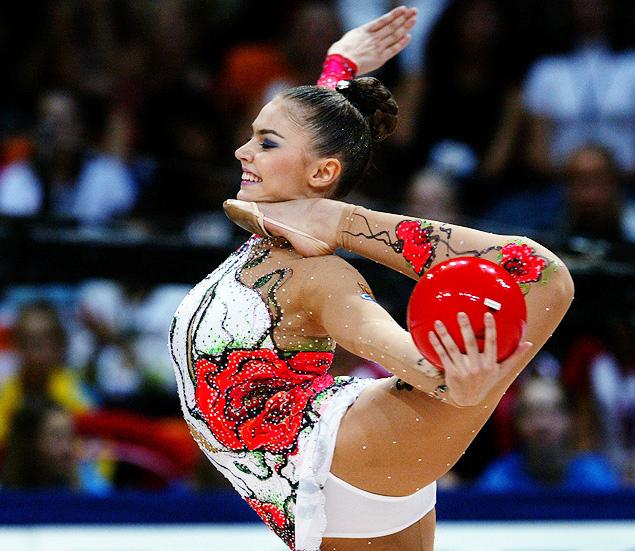 The theme and central elements on display in the opening ceremonies of the Sochi Winter Olympics were kept relatively secret.

However, the rumor was that at the lavish Fisht Stadium, which is in close proximity to the Black Sea where the macho Russian president purportedly dives for buried treasure, 2004 Olympic rhythmic gymnastics champion Alina Kabayeva would ignite the Olympic flame.

Last year, President Putin divorced Lyudmila, his wife of 30 years. It is believed that the reason for the split was Kabayeva, a woman who can balance a ball with one foot tucked under her chin. Evidently, it’s common knowledge in Russia that the fetching Alina lights Vladimir’s flame pretty consistently, which may be what gave her the experience she needed to handle Sochi’s big Olympic torch.

Just back from wrestling a bear no doubt, when asked whether his rhythmic gymnast lover, who certainly knows her way around an apparatus or two, would be lighting his fire…er, I mean lighting the Olympic torch, Mr. Putin had this to say:

“I’m aware of this (the speculation), I was told of this by (Kremlin spokesman) Dmitry Peskov. These are the usual red herrings.”

Suggesting that Alina Kabayeva might be igniting the conflagration, Putin continued: “We have many outstanding sports people who are significant and known in the whole world and I am not going to interfere in this process.”

Siberian river swimmer that he is, the Russian president did clarify that it would not be him who would be lighting the flame.

Putin pointed out “I do not represent winter sports, I am just a fan.”

That’s why, between the stray dogs, brown water, bugs, and lack of light bulbs at the Sochi hotel, and  finding out that there was a good chance Putin’s mistress would light the Olympic flame, it’s too bad funny man Jay Leno just left the Tonight Show, because this Olympic torch stuff does make for some outstanding late-night comedy.

The only thing that would make better joke material than Alina lighting the Olympic torch would be if Bill Clinton decided to drop in on Sochi to see if the agile gymnast would also be interested in lighting an ex-president’s cigar.

In the end, Alina Kabayeva did not literally light the Olympic flame, she just carried the torch!