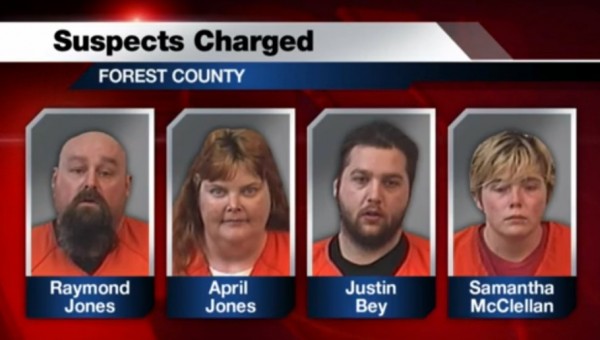 Two guys on an ATV found a guy out in the wood, practically frozen.

They took him to the hospital, where it was determined he had been, as they say in the country “beaten about the head and face,” and had multiple fractures, including a broken jaw, and two broken ribs. Dude had been in the woods all night, and was frostbit all over, and one of his limbs was practically frozen solid.

“Given the severity of how badly beaten he was, the amount of blood loss, and the degree of hypothermia, including the solidification of his one limbs, and the extensive frostbite throughout, I don’t think he had much longer,” Forest County District Attorney Charles Simono told WLUK-TV in Green Bay.

When I read this, I though of the TV show, “I survived,” where they profile victims of heinous crimes who survived. However this might just be pedophile justice.

In a strange twist, it turns out that the victim was a guest of a family, and it was alleged by the daughter of the couple that he had touched her on the butt. And that’s when the whooping began.

Now who’s to say if this was overreach, a misunderstanding of sorts. But what I do know is parents get pretty touchy these days about their children when they suspect Liberalism disguised as pedophilia.

In the case of this victim, the culprits admitted to tying him up, and kicking the crap out of him. The attack was brutal, and according to the criminal complaint, during a two-day period the man was beaten with sticks and punched and kicked in the head and groin, urinated upon, and had feces wiped on his head.

He escaped into the woods where they decided to let the wolves eat him; but he survived barely.

One might file this under “Pedophile Justice?” What would you do if you suspected somebody of targeting your child?