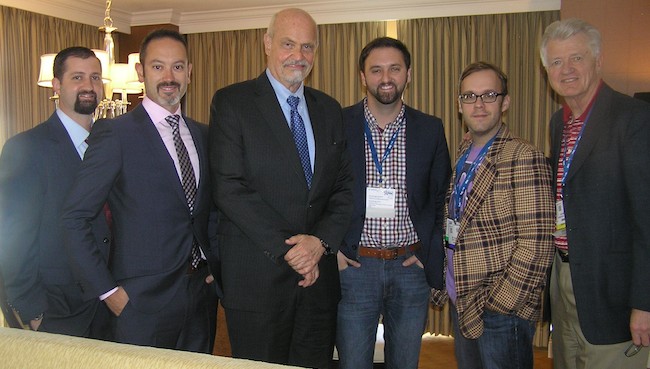 Persecuted is the epic story of a preacher who takes an incredible stand against the United States’ attempt to regulate all religion.

Little did he know that his freedom of speech would soon be limited by the evil tactics of a United States Senator… and even the President.

Not only does the film have a top-shelf cast, the crew also comes from blockbuster productions such as Breaking Bad and The Avengers.   Liberty Alliance had the pleasure of speaking exclusively with Dr. Higgins, Senator Thompson and writer/director Daniel Lusko.

“The quality of the story and our pursuit in the end was to make the best film with the best actors, best crew and best score available.”

Lusko penned this critical story after waking up inspired in the middle of the night.

“I woke up and was hit with this scenario where an uncompromising man stands up to a government who will do anything to silence him,” says Lusko.

“The U.S. government in the film is trying to pass legislation which requires all religious groups to treat others with the same amount of value and respect in the interest of national security.  Essentially you’re no longer free to stand up for what you believe, and Christians are only able to say that Jesus is ONE of the ways, not THE WAY.”

According to Dr. Higgins, who plays the President in the film, the film reaches out to more than just people of faith.

“The story is bigger than just a Christian-based movie. The main character is being set up for a downfall because he doesn’t agree with his freedoms being taken away.  That’s why it’ll resonate with all people.”

Sen. Fred Thompson, who plays a priest and father of the main character in the film agrees with Lusko and Higgins about the film’s importance.

“It’s a different take on the church/state issue.  I can’t think of another movie that’s dealt with that issue in this way.”

When asked if the intense and at times scary scenarios in the movie could play out in the real world, Sen. Thompson replied:

Persecuted is being heralded as one of the few faith-based films that truly crosses over into mainstream Hollywood.  Its acting, cinematography and score is unparalleled by many and its story is simply gripping.

It’s a can’t-miss film that everyone should see.

The film will be shown at CPAC 2014 on Friday night at 8pm and Saturday for an encore presentation at 1pm.

Persecuted opens in limited release on May 9.  To bring the film to your college or town, visit http://www.persecutedmovie.com/tickets

This is what happens if you give up your guns: Australia announces TWO YEARS in prison for violating covid rules
DC Clothesline