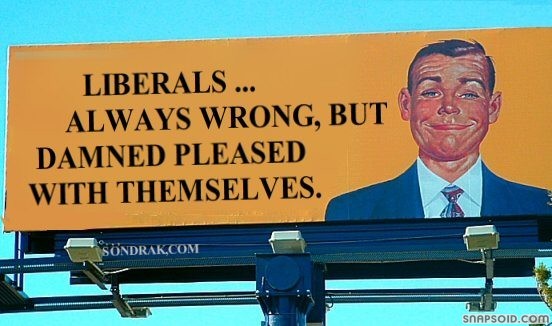 I liken Liberalism to wiping your buttocks after taking a crap. No matter how many times you wipe, you can only get your butt so clean.

The only thing that can get rid of that stench is a COMPLETE WASHING, and that’s exactly what you need if you have been anywhere near a Liberal. You need a SOAKING, if not total quarantine.

Each and every day, Liberalism puts its smelly buttocks on display. Whether it’s some scheming politician who wants you to believe in MAGIC, like Barack Obama’s magic ObamaCare, or it’s some bleeding heart who wants us to feel sorry for some criminal  because of his (or her) poor upbringing.

To be a Liberal, you must just admit to being an idiot, immune to logic and reason.

Liberals want GUN CONTROL, KNOWING that a gun has never killed anybody. When there is gun violence, you can bet there is a Liberal nearby with an illegal weapon and an “I voted for Obama” t-shirt. Liberals know the stats on crimes by Liberals with illegal guns, but they don’t care. The fact is that laws don’t have to make sense for Liberals. For a Liberal, a law is meant to accomplish 3 things:

Recently we reported on the Detroit police chief warning Detroit citizens, “Don’t wait for the cops!” He added that armed citizens are the best deterrent to crime.

We Conservatives get ecstatic when somebody shows common sense in dealing with COMMON SENSE ISSUES. We are like puppies, when somebody validates the OBVIOUS.

“The police chief of DETROIT BELIEVES US! He understands us.”

HELL, HE SHOULD understand us. He knows the criminal element.

You ask for solutions, where here is one. If somebody wants gun control, we have them ARRESTED or ADMITTED to an insane asylum. Fools who fight for gun control are idiots of the highest order. I don’t need a Constitution to tell me that I will protect myself, my family, my loved ones by the most expedient means necessary. When the Phasor from Star Trek is a reality, I will drop my guns and get me a Phasor AND an ASSAULT phasor!

Stop being grateful for people like Police Chief James Craig saying the OBVIOUS. Promote his point of view, yes. But he is speaking common sense. It’s time we begin DEMONIZING those who DON’T speak like James Craig.