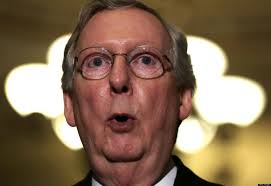 They say Washington DC is Hollywood for ugly people, and boy does McConnell not disappoint.

No wonder the Left sees the Republican Party as the party of stupid rich old white men. McConnell is yet another poster child.

I’m not sure what McConnell wanted to accomplish with this video, but it’s just plain weird, and so is McConnell.

For the record, this is NOT a video made by my team, and thus the “B” at the end is not our doing.

Disclaimer notwithstanding, what you do see in this video is a guy who thinks he’s Hollywood, but he’s way past his prime. And I have asked the question, “Why do rich  politicians want to die in office” many times, and one could certainly ask this of McConnell. I can only surmise that McConnell (and all politicians) like terrorizing Tea Party members, aka normal tax-paying patriotic responsible Americans!

I’m not one to buy into diversity for diversity’s sake, but I DARE you to play “count the black people” in Mitch’s video! Holy Mother of Midnight, are the NO black people in Kentucky?

There is one young black guy in a meeting, and one black girl walking with McConnell on a college campus. There, McConnell did his part for youth and minority outreach, which is about the sum of the effort of the Republican Party in general.

McConnell relates with youth? Negro please! McConnell is 15 years older than dirt, and he wants you to believe he’s “youthful and enthusiastic.”

Old fools with ideas just as antiquated, and an enemy of the every true Conservative.