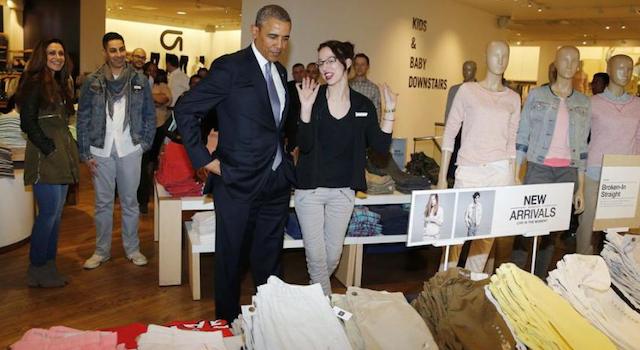 It’s great to have a president who has his priorities in order.

Supposedly in a poorly-planned effort to embarrass Congress into raising the minimum wage, Barack Obama prevented minimum wage workers from getting to work with a surprise visit that shut down an already jam-packed Times Square.

Barack Obama went photo-op-sweater-shopping in Manhattan all because (with his prodding) Gap Inc. already took it upon themselves to raise the minimum wage.

While in the Gap, and supposedly for the women in his life, the fashion savvy Barack contemplated pink sweaters and 1969 sweatshirts. The president told the ladies that he was searching for a gift for his wife and daughters. 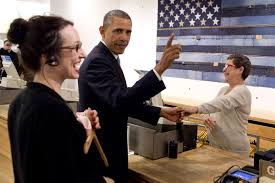 The store clerk that waited on the president looked almost as smitten as Helle Thorning-Schmidt, the Danish Prime Minister who took a selfie with the president at Nelson Mandela’s solemn funeral service.

In another awkward moment, the Gap worker (who probably heard Obama say that he could have spawned the hoodie-wearing Trayvon Martin) suggested a hoodie might be perfect for the president. Quickly nixing the suggestion, Obama told the helpful Gap girl that the first lady wasn’t into hoodies.

From  hoodie wear the duo sauntered over to the V-neck sweater table where the president mentioned:

“I’m worried the V-neck is going to slip.”

Ahem, while slipping V-necks and appearing on Between Two Ferns to push Obamacare with actor Zach Galifianakis are important concerns, is Obama equally as concerned about that missing Malaysian airline with three American passport owners on board?

How about Putin reasserting his machismo in Crimea, or the IRS scandal, or the truth behind Benghazi? How about Iran with a nuke?

Guess not, because after much measured deliberation, the president did choose a politically-correct black and white stripped sweater, for his wife, as well as a stereotypical pink-for-girls cardigans for his daughters.

Obama who’s been doing an awful lot of golfing, said he wasn’t accustomed to shopping much these days. Not for nothing, as they say in New York, he hasn’t been doing much of anything else for that matter.

The increasingly unimpressive Barack Obama, apparently perceives himself to be someone who still impresses everyone. Obama told the dumb, er, I mean dumbstruck staff that based on the sweaters he chose, which Michelle and the girls will likely never wear, “the ladies [would] be impressed by [his] style sense.”

Approaching the register, the man Hillary warned America (and she was right) shouldn’t be answering the White House phone at 3:00 am asked the hovering horde, “Who’s going to ring me up?”

Once at the register, Obama was not exempt from perfunctory question as to whether he was interested in signing up for a Gap store card. The president declined. Ostensibly, if given the choice, the Charger-in-Chief prefers running up bills and accruing expenses – with interest – on account the American people’s account.

Obama, who is currently overseeing the American economy, did admit that normally he doesn’t carry a wallet. Hopefully, the Chinese weren’t listening when he told the group that he wasn’t sure how to pay.

Then, after swiping his own credit card, and making a couple of truly bad jokes that everyone laughed at out of a perverted sense of respect, the president talked about getting Congress to raise the federal minimum wage.

With navy blue bag in hand, the president said that the Gap raising the minimum wage is not only good for the store’s workers and their families, “it’s also good for the entire economy.” Could he possibly mean the US economy that he managed to really screw up?

Prior to leaving, and sounding a lot like Gap poster boy Spike Lee, Obama congratulated the Gap for “doing the right thing!”

An old Gap slogan said that “For every generation, there’s a gap” and more than ever that slogan applies today.

It’s going to take much more than a hike in the minimum wage to fix America’s huge ‘gap’ in leadership.

Sadly, a pink sweater, a hoodie, or a midday presidential photo op in Times Square, will not cure the national, economic, social, moral, and spiritual fissure left to the current ‘gap generation’ compliments of a cool, style-savvy Gap shopper named Barack Obama.