And here I thought only country boys knew how to have fun, and the city kids are showing them up.

The latest craze is “car tipping,” as in tipping a car so small that every time my 7-year old sees one, he thinks it’s a toy.

“Can I get one of those for Christmas, Dad?!”

All I can say is this cracks me up, and it’s payback for nutty Liberalism. Don’t be surprised if cities pass ordinances mandating that once parked, a “smart car” must be tipped up in the horizontal position for maximum parking allocation. Failure to do so will result in a $500 fine and confiscation of your car.

I’d sit outside at a restaurant, and watch as Leftist vegans with arms the size of a spaghetti noodle try to tip their cars into the approved position.

For now, smart car tipping will be done like crop circles, like a thief in the night.

Three Smart cars were flipped in the Ingleside and Bernal Heights districts.

A witness said he stepped outside to smoke a cigarette when he saw eight people with hoodies on walk up to one of the cars.

“I thought they looked like they were up to no good and then sure enough they walk up to this Smart Car right here, all huddle around it and just lift it up and set it on its hind legs, like a dog on its hind legs, — that’s pretty much it,” said witness Brandon Michael. 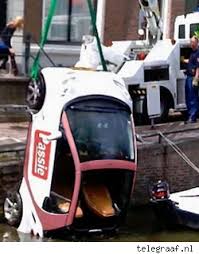 Smart-car-tipping-Trayvon-Martin-loving bandits. Isn’t there an award for this?

This game is not limited to America. Smart car tipping is happening all over the world, and here is a story about how they do it in Amsterdam. The Dutch go a step further, and toss the little midget cars into the many canals found in Amsterdam.

I think I will stick with my gas-guzzling 3,000lb SUV.