I am absolutely mad as hell and I’m not going to take it any longer. The leftists have screamed “War on Women” and “Racism” for too long.

When a conservative takes a stand against Al Sharpton for making ridiculously racist statements like, “White folks was [sic] in caves while we was building empires…. We taught philosophy and astrology and mathematics before Socrates and them Greek homos ever got around to it,” they are inexplicably called racists.

Yet when conservative black men and women merely express their views which differ from the racist rants of Sharpton, et al, Liberals and Democrats call these blacks “Uncle Toms.”

Then there is the  “War on Women” thing.

Dana Loesch, a conservative radio host, gets more hate mail in a day than Beyonce, Oprah & Whoopi Goldberg get in a lifetime.

Sarah Palin is yet another poster child for the real “War on Women.” Every time Palin speaks, the Democrats and their lap dog media spew hatred and fury at her, while lamenting about the conservative “War on Women” in their next breath. It’s not our war. We didn’t start it but, we sure as hell are gonna finish it.

Just today, Former US Secretary of State, Condoleeza Rice, who is both black and a woman, backed out of being the commencement speaker at the “prestigious” Rutgers University, because there were students–at the behest of a few professors–protesting her appearance. The protestors claim it was because of Rice’s position as Secretary of State for Bush and his administrations war in Iraq. However in the infamous words of former Whitehouse Spokesman, Tommy Vietor, 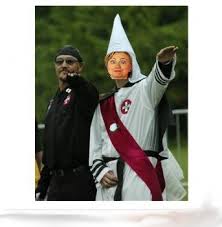 Imagine if the University of Alabama or Mississippi State protested Rice? You know…a SOUTHERN university, using the exact same claims. The Democrats and the media (I know…redundant) would be up in hocking racism out of the trunks of their cars.

And despite Rice’s “R” that denotes her political persuasion, you can bet that racists Sharpton, Jackson, and the NAACP would be in line for their recompense. There would be entire media cycles dedicated to the topic, and screams for more diversity in Southern colleges and university, along with appropriate race training. Congress would hold congressional hearings, and when the appropriate amount of reparations had been extorted from the American taxpayers, then all would be well in the universe.

But DAMNIT, this was Rutgers. One of those tolerant, Liberal Ivy League institutions (I know Rutgers is Big 10, but making the broader point) elitists schools who love all things female, especially black.

To all those leftists and Democrats and lap dog MSM, I say to you, “Bring. It. On”. I’m ready. We conservatives are ready to take back our name, take back our values and take back our country. Leftists – you should start running…now.