Like the yeti, the Sasquatch, the Loch Ness monster, unicorns, and all things Harry Potter, the Tea Party racist remains a mythical legend. Until now!

A North Korean state-run news agency earlier this month launched an ugly, racist diatribe against President Obama, calling the U.S.’s first black head of state a “crossbreed with unclear blood.” The agency also said that Obama “still has the figure of monkey while the human race has evolved through millions of years,” and that “it would be perfect for Obama to live with a group of monkeys in the world’s largest African natural zoo and lick the bread crumbs thrown by spectators.” 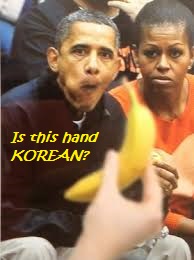 Has anybody even thought about how the search for the Tea Party racist fizzled and why? I have the answer.

After the Left could not pinpoint Tea Party Waldo, they decided that labeling the movement racist would suffice. The Left just can’t shake the Tea Party, and that is so vexing to them.

There is good news for this potential racist. If indeed the Tea Party racist is North Korean, he can expect to get lots of money from the Left.