A new series brought to you exclusively from The Black Sphere! 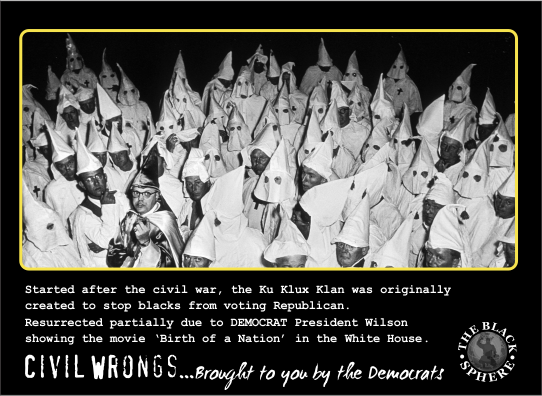 The Left may try and try to claim ownership of civil rights, but history shows those claims to be lies.

Study the roots of the Ku Klux Klan, birthed as a Democrat idea and fueled by the horrible movie, Birth of a Nation.

Founded in 1866, the Ku Klux Klan (KKK) extended into almost every southern state by 1870 and became a vehicle for white southern resistance to the Republican Party’s Reconstruction-era policies aimed at establishing political and economic equality for blacks. Its members waged an underground campaign of intimidation and violence directed at white and black Republican leaders.

It was people of faith, abolitionists and others, who championed the plight of blacks in America. And it was the Republican party that pushed for civil rights. Several Republican presidents, including Abraham Lincoln and Cal Coolidge, are noted for their quiet, but steady leadership in moving the nation toward a truly color-blind nation.

And of course the Dems would like to forget that Martin Luther King Jr. was a Republican!