People have wondered why Obama “ums and uhs” during his off teleprompter speeches, and we might have the answer: He’s a psychopath.

A recent paper from Cornell University found that psychopaths have a unique, discernible writing and speaking pattern.

The scientists analyzed the speech and texts of 14 psychopathic and 38 non-psychopathic murderers, and they found that psychopaths are more likely to use filler ums and uhs.

Psychopaths (relative to their counterparts) included more rational cause-and-effect descriptors (e.g., ‘because’, ‘since’), focused on material needs (food, drink, money), and contained fewer references to social needs (family, religion/spirituality). Psychopaths’ speech contained a higher frequency of disfluencies (‘uh’, ‘um’) indicating that describing such a powerful, ‘emotional’ event to another person was relatively difficult for them.

Further, psychopaths are more likely to use cause-and-effect words like “because,” and are less likely to make mention of religion or family (unless politically expedient) [I added that!].

Apparently, not mentioning religion or family denotes an emotional detachment. 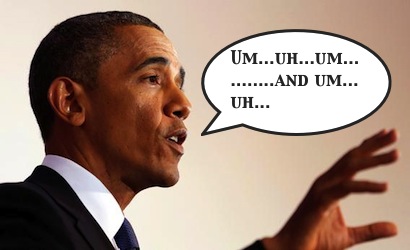