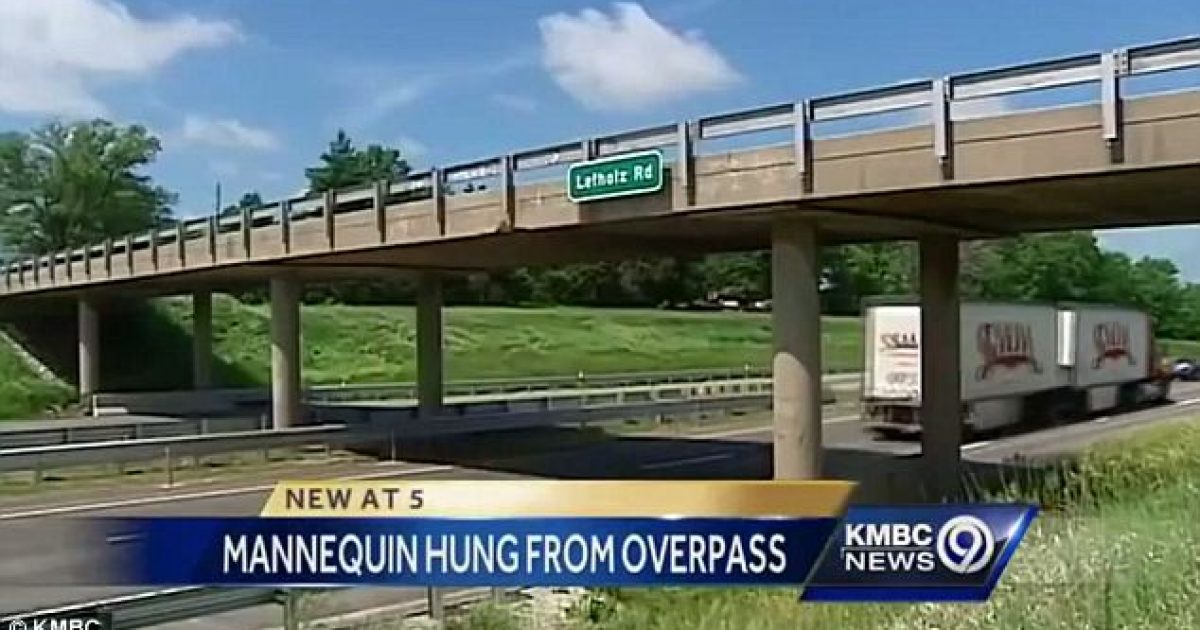 I’ve learned how to sniff out the shenanigans of Liberals, so when I read a story that a dummy with an Obama mask was hung from a bridge, I got the whiff of dung.

According to this report from Reuters:

A fully clothed mannequin wearing a President Barack Obama mask was discovered hanging by a rope from a highway overpass in the Kansas City area.

Interstate 70 was closed down briefly while a bomb squad investigated because sheriff’s deputies saw a suspicious device attached to the mannequin, said Sergeant Ronda Montgomery of the Jackson County Sheriff’s Office.

Let’s play detective, shall we, as I know this is the work of a Liberal Democrat. Here are a few clues:

First, no Conservative would do that to a mannequin.

I’m not talking about HANGING it, I’m talking about putting an OBAMA MASK on the dang thing. That’s just not right! No mannequin should be subjected to that type of humiliation, even for Conservatives who I know first-hand discriminate against mannequins, especially black mannequins.

Second, no Conservative would allow anybody to profit by purchasing an Obama mask. Why buy an Obama mask, when you can find them at garage sales and thrift stores, and they actually pay YOU to take all their Obama crap.

Third and finally, when a black man is hung, you know a Democrat was involved. Democrats love to take people back symbolically to slavery, and then blame somebody else for it. That’s their modis operandi.

This type of incident makes a great distraction from things like:

Back to the story.

I love how they escalate the seriousness of the story by adding explosives:

No explosives were found on the mannequin, which was discovered on a bridge about 25 miles (40 km) east of Kansas City, [Sgt Ronda] Montgomery said. The mannequin was reported to the authorities around daybreak and it is unclear how long it had been hanging from the structure, she said.

Really? No explosives were found in a mannequin hanging from a bridge? Sounds like amateur hour, because explosives are almost always found from hanging mannequins. Don’t believe me…Google it!

And in case you were not beguiled by the fact that no explosives were found in the mannequin and you have missed the seriousness of this story, the write adds one more critical element:

A rope was used to string up the mannequin but authorities were not releasing specific details, Montgomery said, adding that the incident was still under investigation. “We are trying to put pieces of the puzzle together, but it’s early,” Montgomery said.

A ROPE was used to “string up” the mannequin! Well which was it: rope or string?! It makes a difference, DAMNIT! The most important detail of this story, and they leave me hanging, pardon the pun.

For those interested in the history of mannequin lynching, the last time a mannequin was hung over a bridge I believe they used spider web.

This is what constitutes “mainstream media” these days.

Ironically, had this happened in 2009 when Leftist worshipped Baby Black Jesus no matter what, this story could have risen to the level of that other important story of white power and privilege surrounding the death of Trayvon Martin.

Here is a picture of Obama’s anatomically correct mannequin. 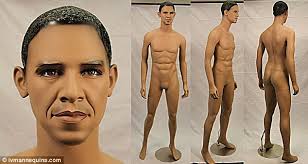