It’s official. Obama is a girl! If this workout video doesn’t prove that Obama has a membership at Curves, I don’t know what does.

Then again there was Obama’s sissy move in Syr like having Putin handle Syria, then Putin’s public sodomy of Barack on Ukraine. Oh, and then there was the recent hardcore negotiation to get our traitor back in exchange for FIVE notorious American-hating high-level Qaida operatives. Almost forgot the “mom jeans” and the sissy first pitch.

Holy Mother of all things feminine, this video may be the most embarrassing of all that!

If this is the leader of the free world, the world won’t be free very long.

If I were the Marine in the Mexican jail, I would seriously hope the Mexican Federalis haven’t seen this “princess” workout video. AND, I would be planning my own escape, since America’s princess president has ordered a new pen and phone to match his outfit. 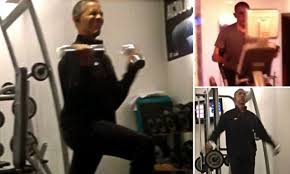 Obama is straining to lift all of TEN POUNDS…FIVE pounds with each arm.