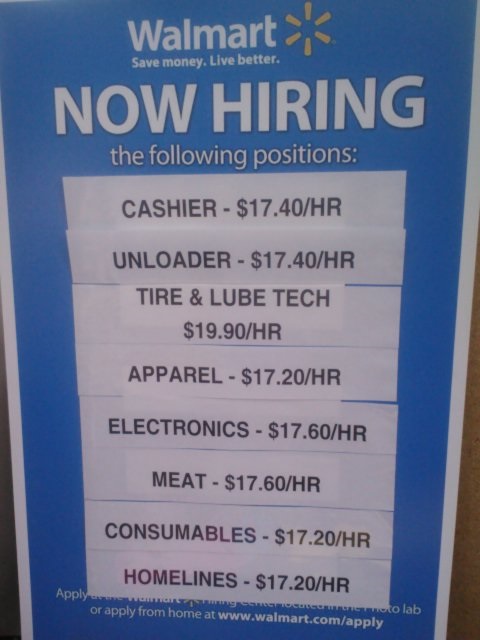 The Left don’t want you to know the truth about Walmart, and that is Walmart responds to the market. And in this town Walmart pays more the TWICE the minimum wage, with entry level workers earning over $17 an hour.

I repeat: Walmart in Williston, North Dakota that pays more than the newly mandated $15 per hour in Seattle Washington. The difference is Seattle will lose business, because government has decided to create this new cancer. Williston however will continue to flourish, as it is allowing the free market forces to work.

According to this article in the American Enterprise Institute, the Williston economy is booming

“…thanks to the gusher of shale oil being pumped from the prolific Bakken oil fields. Daily oil production in the Bakken is approaching one million barrels per day, placing it in an elite group of only ten super-giant oil fields in the world that have ever produced that much oil at peak production. In total, nearly one billion barrels of oil have now been produced in the Bakken oil fields, and all of that oil production and related activities have brought the unemployment rate in the Williston area down to below 1% in most months over the last three years. For the most recent month – April – the jobless rate here was 0.9%.”

The photo above of wages at the Williston Walmart highlights some important economic concepts:

1. Walmart pays wages that reflect the economic conditions in a local market based on the supply and demand realities of the local labor market. In other words, Walmart can’t really set wages independent of market forces and it’s really at the mercy of the market in every local community. If Walmart offered the minimum wage of $7.25 per hour in the Bakken area, it wouldn’t be able to staff its stores.