You knew it was coming.

A Fourth of July parade float in Nebraska that showed a dummy standing outside an outhouse labeled “Obama Presidential Library” is drawing cries of racism from local residents and the Nebraska Democratic Party.

The float, in the annual Independence Day parade in Norfolk, Neb., was affixed to trailer being towed behind a blue pickup truck. The dummy was clad in overalls, standing by a walker next to the outhouse.

The pickup truck and the float did not identify a sponsor, according to the Omaha World-Herald.

In a statement, the Nebraska Democratic Party called the float one of the “worst shows of racism and disrespect for the presidency that Nebraska has ever seen,” according to the World-Herald.

Glory Kathurima, a black woman living in Norfolk, attended the parade with her nine year-old daughter. She told CBS News Omaha affiliate KMTV she was outraged by the float and disgusted that her daughter witnessed it.   Read the full article

Moe Lane sums up the ridiculousness of the accusation: 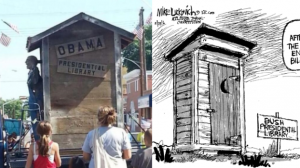 …because I want people to understand precisely how STUPID – and unfortunately revealing – this latest nonsense on stilts is:

A float comparing President Barack Obama’s future presidential library to an outhouse has drawn criticism from some after it appeared in the Fourth of July parade in Norfolk [Nebraska].

It featured a wooden outhouse labeled “Obama Presidential Library” and a figure in overalls standing outside the structure. [He’s also got a walker. – ML]   Read the full article