This demented piece of shit Jayceon Terrell Taylor, known by his rapper/stage name The Game tweeted ‘I guess y’all “can’t breathe” either’ about the two NYPD officers who were gunned down by another piece of shit gang member from Baltimore.

These are the blacks that cops are forced to protect, as I’m sure many cops would rather let these punk ass bitches just kill each other, since they are so good at it. I personally am tired of black people like The Game and the cop killers, and ignorant black dipshits who reflect so poorly on black people as a whole. 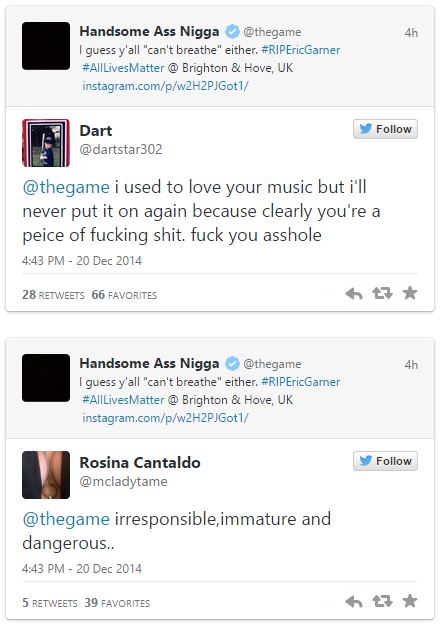 As for The Game, here is what he had to say, as people began to comment negatively on his post:

The comment in my last post was a DIRECT RESPONSE to the picture above: I didn’t say it was cool that 2 cops were murdered senselessly while sitting in their car. These weren’t the cop(s) that killed ERIC GARNER so it wasn’t necessary they die in that manner the same as it wasn’t AT ALL necessary ERIC GARNER die in the way he did. My comment also suggested that #AllLivesMatter & #ShitNeedsToChangeNow but you simple minded fucks skipped right over the real message to pull whatever negativity you could from my post… As expected. One thing about me is, I’m ME. I’m not running from my views or opinions & I’m standing firm on anything I say.. So while all of you trying to find the HATE in my post, there is NONE. What their is…. is an opinion of a man that believes the deaths of innocent people are never OKAY. Never has been !!! It just so happens, that I’m BLACK. It just so happens I grew up as a minority & have been a victim of racial profiling & police harassment in my youth the same as many so I can relate to the continuous STRUGGLE to change the way the GOVERNMENT deals with it’s own employees when they’re supposed to be highly trained professionals who loosely abuse the right to them wearing the badge given to them. “PROTECT & SERVE” does not mean “CHOKE & KILL” an innocent un-armed man…. Retaliating for Eric Garner’s murder the way the MEDIA portrays it happened wasn’t the answer either but it happened…. SO WHAT NOW… Do police KILL more civilians ??? Or do civilians KILL more police ??? Y’all can’t see what’s happening to our country ? Or all YALL still too focused on an iPhone app to get off of it to take a REAL LOOK AROUND ??? & you ask me, do I like police: NO !!! Do I hate police: NO !!! Have I experienced more police abusing their authority than not: YES !!! So that’s why “I” say #FUCKTHEPOLICE !!! That’s “MY OPINION”…. Does that mean I think it’s dope that 2 innocent cops were murdered: NOPE. But does it change my view on crooked police: NOPE !!! So… You can hate me, not like me, say FUCK GAME or UNFOLLOW or never support my MUSIC again because I have an opinion… SO WHAT, I DO NOT GIVE A FUCK !!! [To Be Continued..]

I hope every cop in the country understands that The Game says #FUCKTHEPOLICE and act accordingly.