I know this is supposed to be a “feel good” story, but it’s just wrong on so many levels.

This young black teen, Malik Bryant wrote a letter to Santa asking for “safety.” He just wants to live in a safe neighborhood. 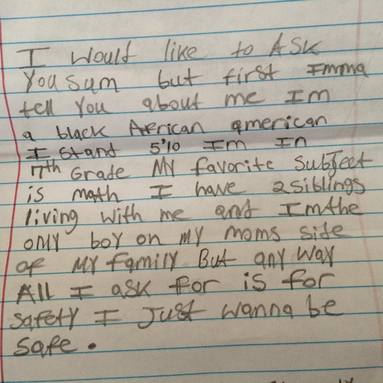 The sad part of this story is that this letter is the work of a 7-year old, yet it’s written by a frightened 13-year old. He says his favorite subject is Math; we KNOW it’s not English.

But when Michelle DiGiacomo, CEO of DirectEffect – a non-profit that aids Chicago-area children in need – came across this letter, she was overwhelmed. It was said of Ms. DiGiacomo, she “couldn’t stop reading it.”

“Someone bigger than Santa needed to see this letter,” DiGiacomo told the newspaper. “I thought the President of the United States needed to see it.”

You would think she would send it to the Department of Education, to start the process of getting the “educators” at his school FIRED! But instead, DiGiacomo sent the letter to U.S. Rep. Michael Quigley, who helped get the letter into the president’s hands.

According to NBC, Quigley said the letter “puts the holidays in perspective.”

While waiting to hear back, Bryant’s mom suggested that the program should get him things to entertain himself inside – since walking outside in their neighborhood has many potential dangers.

“Sometimes he wants to go over to my sister’s house nearby, to hang out with his cousins,” Bryant’s mom told the Sun-Times. “But he can’t because he has to cross gang lines and walk past all these gang members on some of those blocks. And all he ever hears on the news about our neighborhood is shootings, gangs and violence. Malik knows he’s not safe.”

Note that the child’s mother was not worried about him dying at the hands of cops, but of gangs.

Shortly after writing the letter, Bryant received a letter from the White House, signed by Obama.

“I want to offer you a few words of encouragement,” the president wrote. “Each day, I strive to ensure communities like yours are safe places to dream, discover and grow. Please know your security is a priority for me in everything I do as president.”

“If you dare to be bold and creative, work hard every day, and care for others, I’m confident you can achieve anything you imagine,” he added. “And I will be rooting for you.”

Obama offers Bryant words. Because that’s all Obama has. Empty words. And if this teen is waiting for Obama to make his neighborhood safe, he better now hold his breath.