If only Christians girls were forced to marry at age nine and lead a sedentary life, then perhaps the Left would speak out against our religion?

However, as long as pedophilia is practiced in a burka, the abhorrent practice gets a pass. 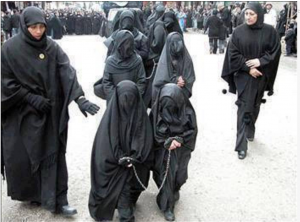 “Cooking, running a household and basic reading and writing. Ideally, it would “begin when they are seven years old and end when they are fifteen, or sometimes a little earlier”.

Women living in IS held terrorist are forced to cover themselves from head to toe with the Al-Khansa Brigade acting like a secret state police, reporting on men and women they do not consider to be living up to the standards they themselves impose and reporting them to the Hisbah religious authority.

Although the figures are impossible to independently verify, the Terrorism Research and Analysis Consortium (TRAC) believes as many as 60 British nationals are currently members of Al-Khansa.

Our numbers in America are easier to track, as they are in direct proportion to the number of people who voted for Obama.