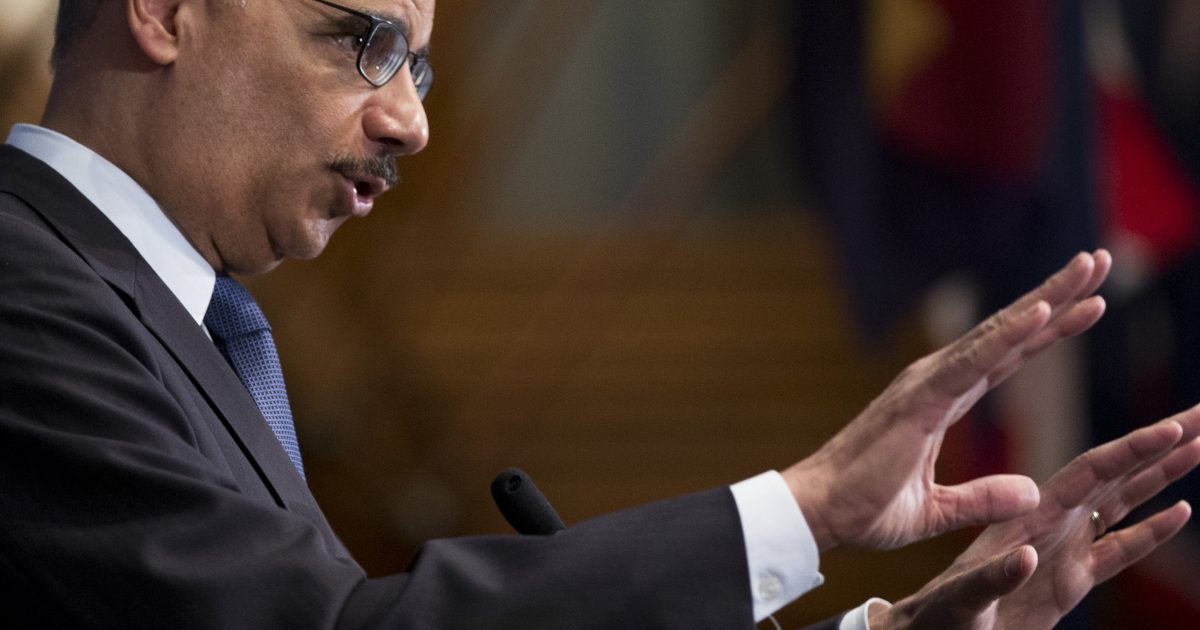 Mad that he couldn’t get a conviction of a good cop who happens to be white, against a thug who happens to be black, the most racist and worst Attorney General in the history of this country decided he will get his pound of flesh from Ferguson “by any means necessary.”

Holder has targeted Ferguson, because he says the city has a racial bias in policing. The government measures such nonsense for political expediency, as Holder has little concern for cities around Ferguson with statistical “bias” 14 times that of Ferguson (see MO Attorney General stats below).

Let’s look at the numbers.
The DOJ states that Ferguson gets 15 percent of its operating budget from fines and forfeitures, and these numbers have been confirmed. But the main claim by the DOJ is that biased policing in Ferguson in traffic stops as a way to raise money has a disparate impact on blacks.
Missouri state law allows cities to obtain up to 30 percent of their operating revenues from fine and forfeitures, and Ferguson is not anywhere close to the number. But that’s just part of the irony.
Eric Holder’s ignores the fact that nine black-run cities in the St. Louis area with overwhelmingly black populations are currently being sued by the Missouri Attorney General for collecting fines and fees over 30 percent of their  budget, an obvious violation of state law.
And if that’s not bad enough, a few of these black-run cities receive as much as 50 percent of their city revenues from fines and fees, these fines and fees overwhelmingly levied against their overwhelmingly black citizens.
If you are beginning to detect an element of racism in this targeting of Ferguson by Eric Holder, then welcome to the party Captain Obvious.
Ferguson is being singled out, because they have a white Republican mayor. But don’t believe me, as this is information directly from the Missouri Attorney General’s website:

Berkeley Police Department
Disparity Index against Whites – 2.69
15% of population is White
42 % of the traffic stops are White

The facts are clear. The DOJ is no better than the IRS in the targeting of white Conservatives. If the mayor of Ferguson were a black Democrat, you would know nothing about this situation in Ferguson.
I suggest the DOJ launch an investigation in Pine Lawn, given their racial disparities in ticketing.
Facebook Twitter