Selma recently celebrated 50 years since “Bloody Sunday,” and Barack Obama was there to punch America in the face.

50 years ago Obama would have been one of the casualties on Edmund Pettus Bridge. Yet there he stood as president of the very same country.

The outcome is horrendous, as Selma is a cesspool, literally and figuratively. All Selma has done is flip.

What you weren’t told about Obama’s visit is the city was so filthy, city officials asked residents to participate in a clean up effort so as not to embarrass the city. Here is an excerpt from the actual posting in the paper: (emphasis added)

As the city prepares for one of the biggest events in its history  — the 50th anniversary Bridge Crossing Jubilee — different community members are doing their part to help clean up the city.

Driving down many roads in Selma trash is visible by the roads and in some cases piles of trash line the road.

It’s a serious problem that people in the community need to address. We want the city to look its best when thousands of people come in March. There are so many attractive things about Selma, and we don’t want it to be overshadowed by the amount of trash lying around.

We are thankful that the city has held a program like the cleanup, and we hope that even after the Jubilee has come and gone, the community will continue to see the need for clean streets. 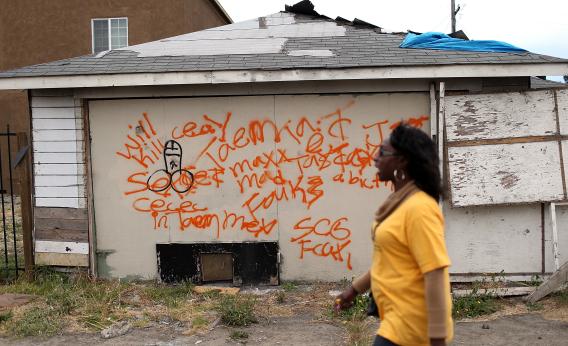 With all the pomp and circumstance of the 50 year celebration, one might be tricked into thinking that Selma would represent the crown jewel of the Civil Rights movement. Yet the real Selma showcases is just more urban blight.

As Daniel Malloy of The Atlanta Journal-Constitution wrote:

Swelling with pride at its place in history, Selma was in a frenzy as it prepared to host two presidents and tens of thousands of people to commemorate the 50th anniversary of the civil-rights movement’s bloody climax.

But in the spotlight, Selma’s blight is impossible to miss. More than 40 percent of Dallas County’s residents live below the poverty line, compared with the national average of 14.5 percent. Selma helped break down legal barriers, paving the way for the Voting Rights Act of 1965, but economic ones have been more stubborn.

According to the 1960 census, its 28,385 residents were about equally split between black and white. The town has shrunk since then, to a population of 19,912 in 2013, and many of its white residents have left; by 2013, four in five residents were black.

“Fifty years ago this place was the center of commerce, it was booming. You came here on a Friday afternoon or early evening on a Saturday, to shop from the rural areas or the small towns.”

Not anymore, John Lewis, and it’s because of race pimps like Lewis.

After the spotlight was put on Selma, the city  had no way to go but up. However it only took 50 years for Democrats to figure out how to torpedo the city. Now Selma has no idea of its identity.

As one periodical put it,

Organizers of this weekend’s jubilee mixed a celebration of Selma’s and the civil-rights movement’s strides with reminders of how far they still must travel. Intermingled with a hip-hop concert and a spiffy gala are workshops on mass incarceration and fair housing.

Improved education is an oft-suggested solution. In Selma, the school system has resegregated to a striking degree.

While whites make up 18 percent of the population, they make up just 2 percent of the city’s 4,000 public-school children, as most white families opted for private schools.

This is the REAL Selma; the one the Left doesn’t want you to know about.