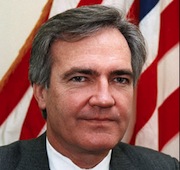 Former White House Councilor, and colleague of Hillary Clinton at Little Rock’s Rose Law Firm. Died of a gunshot wound to the head, ruled a suicide. (He was about to testify against Hillary related to the records she refused to turn over to congress.) Was reported to have been having an affair with Hillary.

On a Monday night in July 1993, a 48-year-old lawyer called Vince Foster was found dead in a park near Washington DC.

He had died from a gunshot wound to the mouth and his father’s .38-calibre revolver, dating from 1913, was at his side.

It was the same method of suicide used by a Marine officer in the film A Few Good Men – which Foster was known recently to have watched.

In the movie, the officer had killed himself because he was distraught about testifying against his commanding officer.

In real life, Vince Foster was distraught at the prospect of being grilled about the shady affairs of Hillary Clinton.

A clear case of suicide, then. Or was it? As the months passed, wild rumours began to grow that a hitman had murdered him because he knew too much.

Tall and handsome, Vince Foster was one of Hillary’s closest colleagues and best friends.