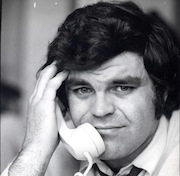 Democratic National Committee Political Director found dead in a hotel room in Little Rock on September 1992. Described by Clinton as a “dear friend and trusted advisor”.

Paul Tully, the political director of the Democratic National Committee and one of his party’s pre-eminent strategists, was found dead in Little Rock, Ark., today. He was 48 years old.

Coroner Steve Nawojczyk of Pulaski County said Mr. Tully’s body was found about 3 P.M. today by a maid at the hotel where he was living in Little Rock. Pending results of an autopsy, the coroner said Mr. Tully appeared to have died of natural causes.

Mr. Tully was among the most impassioned and intense of a generation of Democratic political professionals who devoted much of their lives to regaining the White House. He worked in every Presidential election since 1968.

He had moved to Little Rock this fall to aid in Gov. Bill Clinton’s drive for the White House. Ronald H. Brown, the chairman of the Democratic National Committee, said in a statement tonight: “There will be only one Paul Tully. Pacing, driven, and full of joy, Paul’s commitment to our party and, more importantly, to making this great nation even greater was a fire that burned bright and long.”