Aside from the notion that Obama might very well be the first gay president, I’m not sure what the White House thought it would accomplish by tweeting Obama’s rainbow picture.

Obama deplaned from Air Force One; as he waved, his hand cast a rainbow. How symbolic…NOT! 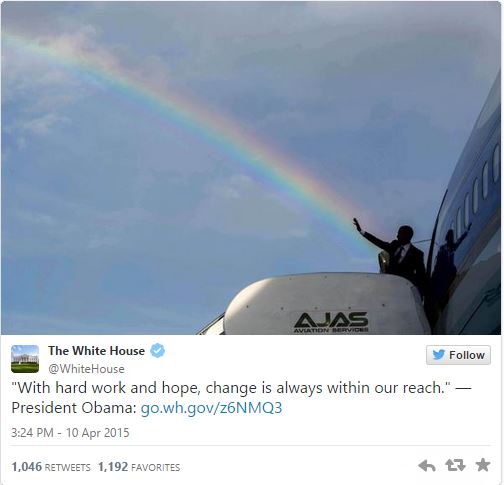 You should note that the tweet garnered a whole 1000+ retweets and favorites, out of the over 6 million twitter followers.

What’s next in the photojournalistic world of Obama? Pictures of him exiting the plane at sunrise as the sun provides a halo?

Obama is still talking about “change.” I think America has had enough of his change, and all the gay symbolism in the world won’t help him. That said, if you are gay in America, this graphic most definitely fits the Obama agenda, and this could be an LGBT poster.