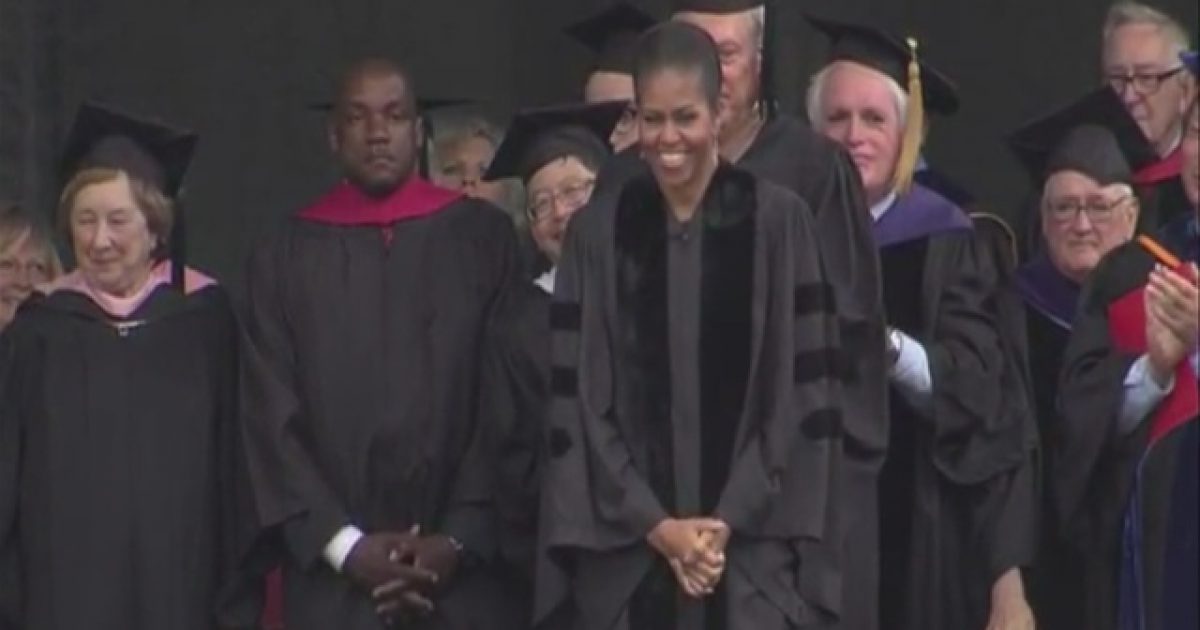 Michelle Obama has done it this time.

She spoke recently to graduates of Oberlin College, and encouraged them to “rise above the noise and shape the revolutions of your time.”

Interesting, given the noise of their time has been created by her party, her ideology, and her husband.

“[T]hink about how even with all the gridlock and polarization in Washington, we have made so much change these past six years:  12 million new jobs.  Sixteen million people who finally have health insurance.  Historic agreements to fight climate change.  Epic increases in college financial aid.  More progress on LGBT rights than any time in our history. And today, it is no longer remarkable to see two beautiful black girls walking their dogs on the South Lawn of the White House lawn.  That’s just the way things are now,” Obama said to applause at the liberal arts college.

Do I start with sarcasm or what?

And where would we be without the gratuitous “race card.”

“See, graduates, this is what happens when you turn your attention outward and decide to brave the noise and engage yourself in the struggles of our time. And that’s why, in his remarks 50 years ago, Dr. King urged the class of ‘65 to ‘stand up’ and ‘be a concerned generation.’ And, graduates, that call to action applies just as much to all of you today.”

The struggles of our time are climate change and more financial age for the ruse of college?!

“So get out there and volunteer on campaigns, and then hold the folks you elect accountable. Follow what’s happening in your city hall, your statehouse, Washington, D.C. Better yet, run for office yourself. Get in there. Shake things up. Don’t be afraid. (Applause.) And get out and vote in every election -– not just the big national ones that get all the attention, but every single election. Make sure the folks who represent you share your values and aspirations.”

So what should these graduates look at? I posted a while back on what Democrats, and specifically black Democrats, have done for graduates. With the news shifting to Cleveland, the graduates might want to “shape the revolution” here.