I think Obama’s budget is like some guys who buy that fancy sports car: compensation for what he lacks below the belt. In Obama’s case, it’s above the shoulders.

Read the latest budget report, and you will see why this country is in trouble. Americans are being told by the government that it had a big budget “surplus” in April.

In its monthly budget report, the Treasury Department said Tuesday that the April surplus totaled $156.7 billion, up from a surplus of $106.9 billion a year earlier. It was the largest surplus since April 2008.

How many guesses do you need as to why April is the month to report this, and it’s ALWAYS good?

But the insult is, that after taxing the hell out of hard-working Americans, Obama added another $50 billion dollars over last year to the treasury. $50 billion may not sound like much, but that was serious money in the time of white presidents.

Here is how Associated Press (AP) spun the budget news:

WASHINGTON (AP) — A flood of tax payments pushed government receipts to an all-time high in April and left the country with the largest monthly budget surplus in seven years.

If you look at the numbers, we spent almost $283 billion more than we took in. But the news gets better, because the Congressional Budget Office is forecasting a full-year deficit of $486 billion, roughly on par with the previous year.
So we are still bleeding from an artery, and these knuckleheads still are breaking out band-aids.
From October through April, revenues totaled $1.89 trillion, up 8.9 percent from the same period last year. Individual payroll taxes and Social Security taxes are running 6 percent higher than a year ago, while individual taxes on stock dividends, capital gains and payments by the self-employed are running 17 percent above last year.

And the reason we don’t make any headway is…SPENDING IS UP!

Government outlays over the past seven months totaled $2.17 trillion, up 6.4 percent from the same period a year ago.

Note here how one Leftist lapdog organization overlooks referencing Obama’s stellar handiwork in their reporting of the “good news”:

The 2014 deficit was down from $680.2 billion in 2013. Before 2013, the U.S. had recorded four straight years of annual deficits above $1 trillion, reflecting the impact of a severe financial crisis and the worst recession since the Great Depression of the 1930s.

Obama’s 2016 budget that he showcased in February seeks authorization from Congress to spend $4 trillion next year. It projects a deficit of $474 billion.

That’s one giant package that compensates for a little man. 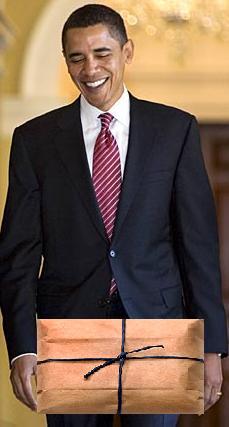