The Federal government has a great scheme.

Imagine that you earn no money, but you are able to get earners to send you almost ALL their earnings. Then you decide how much of their money you will return, and at times make the earners beg you for money.

That’s what the Fed does. It taxes the citizens of the states, then gets the states (and individuals) to fill out lots of paperwork to get their own money back.

WalletHub did the research on the most and least dependent on the Fed.

The idea of the American freeloader burst into the public consciousness when #47percent started trending on Twitter. And while the notion is senselessly insulting to millions of hardworking Americans, it is true that some states receive a far higher return on their federal income tax contributions than others.

I think this is less about being freeloaders, and more about being patsies. The more a state begs for its own money, the more of a rube it is. What an insult to its citizens.

But there is another side. Red States tax their people less than Blue States, and thus you understand why Blue States depend less on the Fed. 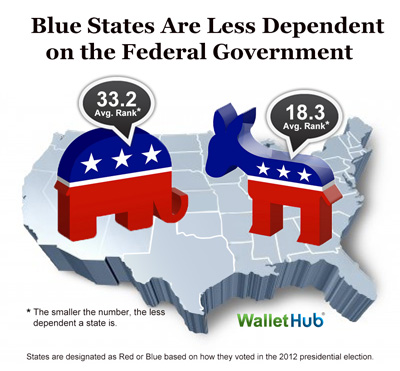