The newly emerged picture shows Jermaine McBean was wearing headphones when cops ordered him to drop an air rifle.

Seriously, I want to know why you would be walking down the street carrying a shotgun and not expect the cops to show up .. ANYONE?

AS REPORTED BY NBC NEWS:

After Florida police shot Jermaine McBean to death as he walked home with an unloaded air rifle, they said there was no reason to believe he did not hear their orders to drop the weapon and that he pointed it at them.

But a newly emerged photo that shows headphones in McBean’s ears immediately after the 2013 shooting raises questions about the police version of events, including why the white earbuds were later found stuffed in the dead computer expert’s pocket.

And another aspect of the police account is also being contradicted — by a man who called 911 in alarm when he saw McBean walking around with the air rifle but who also says McBean never pointed it at police or anyone else.

Michael Russell McCarthy, 58, told NBC News that McBean had the Winchester Model 1000 Air Rifle balanced on his shoulders behind his neck, with his hand over both ends, and was turning around to face police when one officer began shooting. 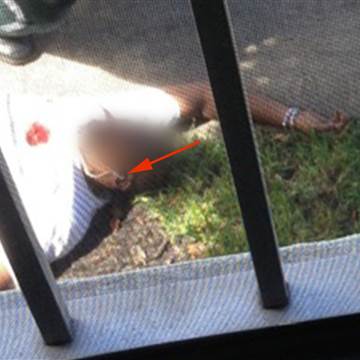