A New Jersey judge’s staffer on Tuesday was suspended with pay when she made what police officers described as “unconscionable and reckless” comments on a TV news channel’s web site regarding the death of a police officer.

According to a tip to the Law Enforcement Examiner by USA Today columnist James Robbins, Leslie Anderson, a judge’s law clerk, posted her thoughts on a widely read Facebook page about the death of New Jersey State Police Trooper Anthony Raspa.

Anderson, who clerks for Middlesex County, New Jersey, Superior Court Judge Travis L. Francis, posted her comments on the Facebook page of a television news channel, News 12 New Jersey. She was responding to a news story about how Trooper Raspa while on patrol died as a result crashing into a deer that attempted to walk across the road.

Although Anderson’s postings were removed when readers began to complain, one of them was captured on screenshot and reposted on Facebook. 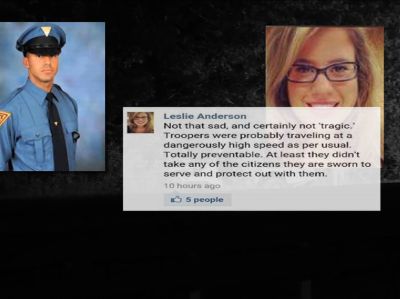