I completely understand why Liberals don’t want to allow any other thought into their den of stupidity.

When I was getting my fellowship at The Dole Institute at the University of Kansas, I visited a classroom. Upon explaining that my fellowship was around the subject of “Black Conservatism,” the ‘professor’ proclaim, “If I had known you were a Conservative, I wouldn’t have let you in my classroom.”

I said to his students, “That’s mighty white of your professor, now isn’t it.” I explained that he only wants them to have ONE point of view, and it was the view of the idiot. I explained that I had never lost a debate to a Liberal, and I never will. I then invited the professor to my class to get his ass kicked, and left his den of stupidity.

Oh yeah, I told his students that if they wanted to see just how much money they wasted being in his class, visit mine; perhaps the school will give them a refund afterwards.

But this type of thinking is prevalent among Liberals. They are afraid of anything Conservative or Republican.

From the Washington Times, we learn that Stephanie Rawlings-Blake, ethno-centric racist mayor of Baltimore is in typical Liberal form:

Hassan Giordano, a leader of a Baltimore branch of the National Association for the Advancement of Colored People (NAACP), said he was told that hosting Republican outreach in his office is off limits.

Mr. Giordano, who calls himself “not the average conservative” because of his Muslim faith and criminal record, told The Daily Caller of irate phone calls he received for trying to work with Republicans.

“When National found out that I was bringing the governor [Larry Hogan, a Republican], the lieutenant governor [Boyd Rutherford, a Republican], and Dr. [Alveda] King to Baltimore and the Sandtown NAACP office, they literally called and said, ‘There’s no way in the world they can come into our office,’ ” Mr. Giordano told The Daily Caller on Friday. “Then the Mayor [Democrat, Stephanie Rawlings-Blake] — who kind of gave the us the NAACP office in Sandtown — called and said, ‘No, you’re not allowed. And then, the president [of the Baltimore NAACP branch, Tessa Hill-Aston] called me and she said, ‘You know they’re having a fit because you’re bringing in too many Republicans.’”

The Left knows that once Conservative (common sense) thought gets back into the community, the Left are doomed. That’s why Rawlings-Blake acted like a sprayed roach when Giordano wanted to bring in Republicans. 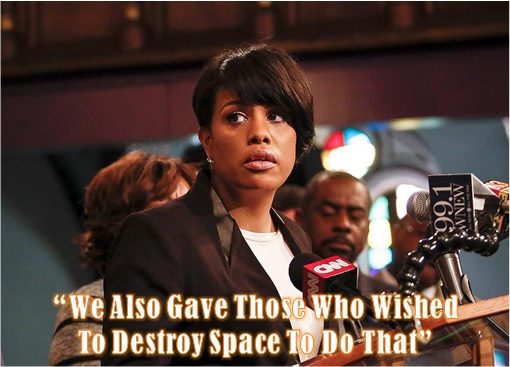