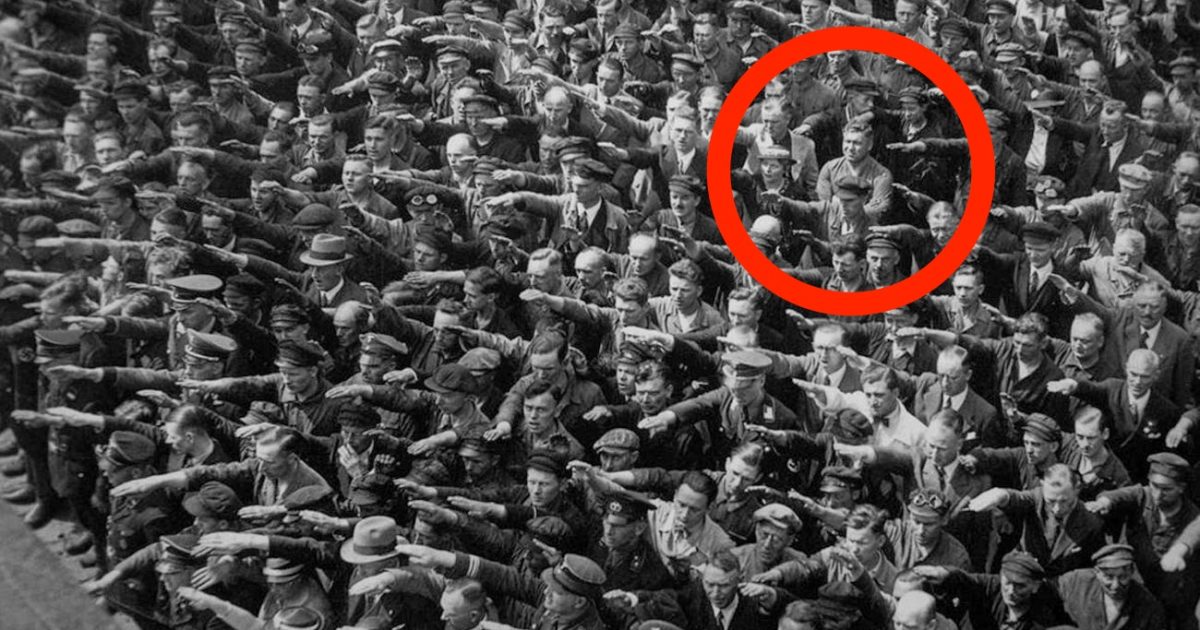 I will never forget seeing this iconic picture of the lone man who would not make the Nazi salute.

Adopted by the Nazi Party in the 1930s, Hitler’s infamous “sieg heil” (meaning “hail victory”) salute was mandatory for all German citizens as a demonstration of loyalty to the Führer, his party, and his nation.

As a black Conservative, or as the Left refers to me, a “coon-ass n*gger,” I can tell you there is an expectation that I will do the Liberal Democrat Nazi salute.

As a cautionary tale to Liberals in general and black Liberals specifically: the Nazis lost. And I am that dude!

Can you imagine the guts it took at that time for him to show that level of defiance, as all around him was the hysteria of Naziism? It is very much what I felt when I would tell black people that I knew Obama to be an incompetent shill, and I wouldn’t vote for him in ten lifetimes.

So who was that lone German?

He was August Landmesser. Attending a 1936 rally, Landmesser refused to perform the Nazi salute, though he himself had been a loyal Nazi.

Landmesser joined the Nazi Party in 1931 and worked his way up. As history shows us, the Nazi Party would become the only legal party in Germany, which eerily parallels what’s happening in America today.

In 1933, Landmesser met a Jewish woman named Irma Eckler, and fell in love. Though forbidden, Landmesser proposed to marry Eckler in 1935.

Landmesser relationship was discovered, and he was expelled from the Nazi Party. Undeterred, the couple fought for their rlationship, and filed for a marriage application in Hamburg. The union was quickly denied under the Nuremberg Laws. Despite not being officially married, the couple welcomed their first daughter, Ingrid, in October 1935.

June 13, 1936 is the date that Landmesser gave a crossed-arm stance during Hitler’s christening of a new German navy vessel. He is easy to spot as he refuses to go along with the crowd.

What we do goes against the Left who are little more than modern-day Nazis.

Landmesser is the Tea Party, the grass roots, the Conservatives, frustrated REAL Republicans, all fighting for justice and the America Way. Never give up! Be a Landmesser.