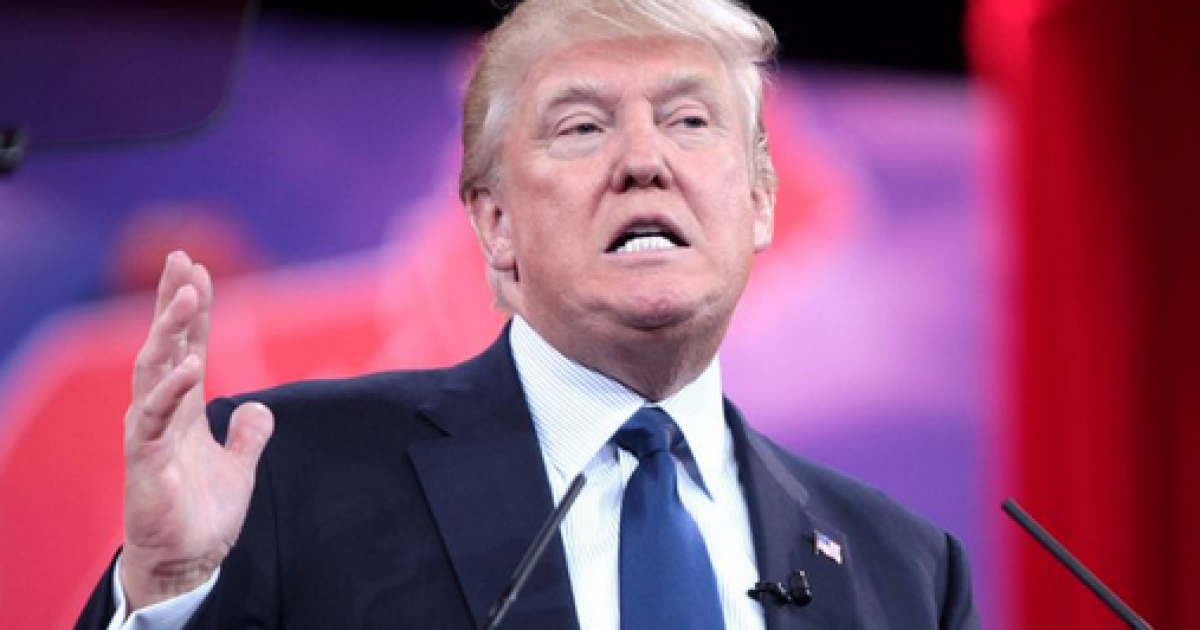 1 – Donald John Trump was born on June 14, 1946, in Queens, New York. He was fourth of the five children of Frederick C. and Mary MacLeod Trump.

2 – Donald was an assertive and energetic boy, so his parents enrolled him in the New York Military Academy when he was 13, hoping the discipline of the school would transform his high energy into productivity and success. The young Trump was a good student, a leader among his peers and a star athlete. He graduated in 1964.

3 – He attended Fordham University, but later transferred to the Wharton School of Finance at the University of Pennsylvania. Trump earned a degree in economics, graduating in 1968.

4 – In 1977, Trump married Ivana Zelnickova Winklmayr, a New York fashion model who had been an alternate on the 1968 Czech Olympic Ski Team. In 1978, Donald John Trump, Jr., the first of three children was born. Following little Donald’s birth, Ivana Trump was named vice president in charge of design in the Trump Organization.

6 – In 1990, the real estate market declined, which reduced the value of Trump’s empire along with his income. His net worth fell from an estimated $1.7 billion to $500 million. However, he was able to climb back from nearly $900 million in the red and in 1997 he was reported to be worth close to $2 billion.

7 – On October 7, 1999, Trump announced the creation of an exploratory committee to assist with his decision as to whether or not he should seek the Reform Party’s nomination for the presidential race of 2000.

9 – Donald Trump was a fixture in the news during his controversial separation and subsequent divorce from his wife, Ivana. He married again, however, this time to Marla Maples, a fledgling actress. They had a daughter a couple of months before their marriage in 1993. In 1997, he filed for divorce from Maples, which was also highly publicized and which became final in June 1999.

10 – In 2003 and 2004 Trump, again, contemplated running for president, but ultimately decided against it.

11 – In 2004, he also said that he really didn’t see himself as a Republican. “In many cases, I probably identify more as Democrat,” Trump explained to CNN’s Wolf Blitzer. “It just seems that the economy does better under the Democrats than the Republicans.”

12 – At around the same time, Trump debuted as the host of NBC’s The Apprentice, which quickly became a hit. Eventually, the show began featuring well-known public figures as contestants, under the revised name The Celebrity Apprentice.

13 – In 2005, Trump was asked his opinion of the Supreme Court’s controversial Kelo decision, which gave public authorities the power to seize private land and turn it over to private interests for “economic development.” He told Fox News that he agreed with the ruling,“100 percent.”

14 – In March 2011, A Wall Street Journal/NBC News poll showed Trump positioned in the lead over all other presidential contenders, including Mitt Romney. A month later, more polls indicated that he could win the Republican presidential nomination. Trump took that opportunity to repeatedly call for President Obama to release his long-form birth certificate, questioning Obama’s origin of birth. Obama complied,  but following that incident came the official announcement from Trump, stating that he will not run for president. Just last month, however, in an interview with CNN’s Anderson Cooper, Trump admitted to still not being sure about whether Obama was born in the U.S. or not, saying: “I don’t know. I really don’t know. I don’t know why he wouldn’t release his records.” He added that he had succeeded in getting Obama to release “something.” Trump also said that Hillary Clinton and John McCain were both Birthers.

16 – In 2012 Trump once again publicly announced he was considering a run for the presidency, though some felt that his association with the Birther movement had hurt his credibility.

17 – Nonetheless, in 2013 Trump formed an exploratory committee and, despite robust backing from Republican voters, declared his lack of interest in running for governor of New York in 2014.

18 – On June 16, 2015, Trump made his White House ambitions official when he tossed his hat into the presidential race, on the Republican ticket. “I am officially running for president of the United States,” he proclaimed from Trump Towers in New York City, “and we are going to make our country great again.”  Lest there be any doubt, Trump added: “I will be the greatest jobs president that God ever created.”

19 – On a number of occasions, Trump said his preferred vice-presidential running mate would be Oprah Winfrey, telling ABC News: “I think Oprah would be great. I’d love to have Oprah. I think we’d win easily, actually.”

20 – Recently, Donald Trump focused his attention on Hillary Clinton’s Muslim Brotherhood-linked right-hand woman, Huma Abedin, and her husband Anthony Weiner. He suggested that a sexually “deviant” former congressman who is married to Hillary Clinton‘s closest aide has probably been privy to the contents of classified emails that passed through Hillary’s home-brew server. Trump told the Daily Mail, during an interview, that “the person seeing her emails more than anybody else is Huma. And who’s Huma married to? The worst deviant in the United States of America, right? Weiner!”

21 – Regarding the first 2016 Republican Primary Debate, Trump said: “I’m not a debater.” He continued, saying: “These politicians. I always say they’re all talk, no action. They debate all the time … I don’t debate. I build.”

22 – Donald Trump warns of the “Muslim problem” in an interview with the Christian Broadcasting Network (CBN).

23 – Regarding ISIS, Trump has said: “I say that you can defeat ISIS by taking their wealth. Take back the oil. Once you go over and take back that oil, they have nothing.”

24 – Regarding how he would deal with ISIS militarily, Trump said he, “would hit [ISIS] so hard. I would find you a proper general, I would find the Patton or MacArthur. I would hit them so hard your head would spin.”

25 – According to a hacktivist group affiliated with Anonymous, Donald Trump’s campaign website uses content delivery network, CloudFlare, which provides services to a considerable amount of ISIS websites. While social pressure has not stopped CloudFlare from continuing to service these accounts, it also apparently hasn’t stopped Trump from using CloudFlare.

26 – On ABC’s This Week Donald Trump made the declaration that he will win the black and Hispanic vote and that Obama has done “nothing” for “African-American citizens of this country.”

28 – Trump opposed the Obama Administration’s pressure on Egyptian President Hosni Mubarak to give up power.

29 – He opposed the invasion of Iraq and any policy aimed at removing Saddam Hussein from power.

30 – Donald Trump doesn’t think the U.S. should not have gotten involved in Syria by supporting the rebels or launching airstrikes in retaliation for the Assad regime’s use of chemical weapons.

31 – He would force Saudi Arabia and other countries to pay for the U.S. military presence that protects them.

32 – Donald Trump attacked “disgusting” Pamela Geller for baiting Muslims with the “draw the prophet” contest in Texas. “I watched Pam [Geller on Fox News] earlier, and it really looks like she’s just taunting everybody,” he said. “What is she doing drawing Muhammad? I mean it’s disgusting. Isn’t there something else they could be doing? Drawing Muhammad?”

33 – Most of Donald Trump’s political contributions have gone to Democrats, until five years ago. It is possible, however, that his donations to super PACs may not be reflected in these figures, because those donations can be made anonymously.

34 – Trump, at various times, has voiced support for single-payer health care, a 14.25 percent wealth tax and a ban on assault weapons. But, he has reversed his position on all of these issues.

35 – While Trump stands in opposition to the nuclear deal with Iran, calling it “terrible,” he “loves the concept” of a good deal.

36 – Trump has not voted in the last six presidential primaries. An article in National Review notes that, “in some of these elections, it appears Trump’s ever-changing party registration rendered him ineligible to cast a primary ballot. But in many others, he could have voted but didn’t.”

37 – The same article also pointed out, “Trump’s spotty voting record hasn’t prevented him from urging others to the ballot box. ‘All eyes are on Florida today,’ Trump tweeted on Jan. 31, 2012. ‘I will be watching the GOP primary results very closely. We need the right candidate to beat @BarackObama.’ ”

38 – Around a quarter of a century ago, real estate developer and best selling author Leonard Stern began making a documentary about Donald Trump. The Huffington Post claims that Trump was furious after viewing the documentary. In it, Trump was characterized as “the opposite of a small-government conservative” and someone who had filled his coffers “on the backs of taxpayers.”

39 – A bit on the litigious side, Trump has sued people, businesses and entire cities and countries. He has sued a newspaper, his ex-wife, a quaint business card store in Georgia and a Native American tribe.

40 – He has also been accused of being miserly and of being perhaps the least charitable billionaire in the United States.

42 – During a Twitter feud with media mogul Arianna Huffington, Trump posted the following tweet: “@ariannahuff is unattractive both inside and out. I fully understand why her former husband left her for a man–he made a good decision.”

43 – Regarding Rosie O’Donnell, with whom Trump had been engaged in a heated, much publicized altercation, Trump issued the following tweet: “Rosie is crude, rude, obnoxious and dumb – other than that I like her very much!”

44 – Reportedly, Trump companies hire a lot of foreign workers, leading critics to call him a hypocrite since he has said he would be the best jobs president.

45 – “He’s not going away,” Steve Duprey, a Republican National Committee member, told Reuters. “There are people who think his candidacy is a flash in the pan or a flash in the moment, but I think that underestimates his appeal.”  And now, even Democrats consider Donald Trump to be a “serious” Republican candidate.