As Reported By Jim Hoft on The Gateway Pundit:

The police association later took down their post after it drew fire from local activists.

A post on the Columbia Police Officers Association’s Facebook page commemorating “Darren Wilson Day” has drawn fire from some Columbia residents, the city’s mayor and the police department itself.

Wilson is the officer who fatally shot Michael Brown, an unarmed black man, in Ferguson on Aug. 9, 2014. The shooting sparked demonstrations in Ferguson and around the nation, including several peaceful gatherings in Columbia, calling for better treatment of blacks by police.

The “Darren Wilson Day” post, which appeared on the one-year anniversary of the shooting, included a message that said the organization’s support for Wilson had nothing to do with race. The organization supports Wilson because of “the fact that he was thoroughly investigated … and BOTH investigations found he did NOTHING wrong,” according to the Facebook post.

The post also called Wilson, who resigned last fall after a grand jury declined to indict him in Brown’s death, an “innocent, but persecuted, officer.”

Association Executive Director Dale Roberts did not respond to phone and email messages Monday morning. However, the association took the post down early Monday afternoon, citing confusion over its intent. 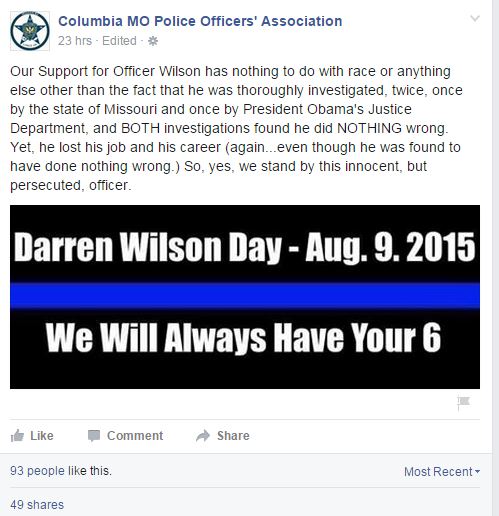